Rene describes herself as a freelance on-camera host, producer and writer on her website. She is heavily involved with games media.

She is a co-host of What’s Good Games, a series of videos, podcasts, and streams about games with former Writer at Polygon and Gamespot Alexa Ray Corriea, BlondeNerd.com Creator Brittney Brombacher, and former Writer at IGN and PlayStation Kristine Steimer. The series is currently being funded on Patreon and earns $5,300 a month from over 800 patrons.

She was previously the host of GameStop TV inside U.S. GameStop store locations along with being the copywriter of original, scripted content. She was also a host at Yahoo Esports and wrote, produced, and hosted a weekly series on Playboy’s Gamer Next Door. She was also a Senior Producer and On-Air Talent for Defy Media hosting the daily video game news show GT News for GameTrailers. She was also in charge of production and programming for Escapist News and Smosh Games and was the Programming Manager of Machinima. She also co-hosted Gamefly’s Game Center.

Examples of her work include the video above from VICE News, where Rene along with Kathryn Edwards and Sam Barlow discuss the money behind the business of video games. You can see her other work on her website’s video page.

2. She’ll Be the Host of the Nintendo World Championships 2017

Rene will be hosting the Nintendo World Championships 2017. She will be joined by play-by-play announcer Jordan Kent who was also the announcer for the Nintendo Tournaments at E3 2017.

The Nintendo World Championships 2017 is a follow-up to 2015’s championships, which was a follow up to the championships in 1990. Players compete against each other while playing a bunch of Nintendo games. Metroid: Samus Returns will be one of the game featured at this year’s event. The event will commence on October 7 at 5 p.m. ET / 2 p.m. PT at Manhattan Center’s Grand Ballroom at New York City.

The Nintendo World Championships isn’t going to be the first time Rene hosts a major gaming event. She produced and hosted the “Raise Your Game” Facebook Live stage at E3 2017. She was also a guest contributor for YouTube’s Live at E3, IGN, and Gamespot.

She covered a number of conventions including PAX and Comic-Con. She also found work as a video game tester and gaming competition competitor. 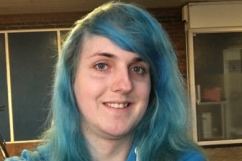 Rene also reported from many red carpet premieres and interviewed celebrities such as the cast of Game of Thrones, Adam West, Jerry Seinfeld, Tony Hawk, Anthony Hopkins, the cast of The Walking Dead, and more.

According to her LinkedIn page, she was also the host of Race Across America. She was also the head of development and Executive Producer for all creative and business development for The Lone Blazers production company, which she co-founded. She also worked on a travel show, a talk show, and even a dating game show.

5. She Grew Up in Fargo, North Dakota & Graduated from the University of Minnesota

Mark Jeffrey, CEO & co-founder at Guardian Circle where Rene worked for This Week In, Inc. as a Producer, had this to say about Rene on her LinkedIn page:

I can’t recommend her highly enough. She is very passionate about what she does, and very proactive. She takes ownership of whatever project she is on and drives it forward. She is also very organized and efficient. If I could hire Andrea back, I would in a second.

Rene’s honors thesis looked at the images of women in hip-hop music and how they affect young women’s perspectives on sexuality.