At one point, Ubisoft’s Assassin’s Creed series was an annual franchise.

Their method of releasing new Assassin’s Creed games noticeably took its toll on the franchise’s overall quality. After the release of 2015’s Assassin’s Creed Syndicate, Ubisoft’s in-house development team decided to take a year off in order to craft a return to greatness for the series. Now that 2017 has arrived, fans can look forward to exploring a new locale and discovering the true beginnings of the Assassins vs. Templar war. All the while, they’ll navigate the hot sands of Egypt and master the combat skills of a new protagonist – Bayek.

After spending a few hours with the game, it’s quite evident that this prequel will put Assassin’s Creed back on the high mantle it once ruled over. Check out this preview of Assassin’s Creed Origins to properly prepare for its arrival on October 27.

1. This Entry Will Take Players Back to the Origins of the Very First Assassin

As the game’s name implies, Assassin’s Creed Origins takes place during the Ptolemaic period set within Ancient Egypt. Players take on the role of Bayek, a Medjay entrusted with protecting the people of his kingdom. The game’s plot mixes in real-world events with fictional elements that incorporates the origins of the Brotherhood of Assassins, the Templar Order and their conflict. Some of the historic figures you’ll encounter are Ptolemy XIII, his sister Cleopatra and Julius Caesar. During the course of his journey, Bayek will eventually meet the individuals who’re manipulating events behind the scenes. These events push Bayek into his legendary role as the very first Assassin.

2. Egypt Will be the Central Hub for this Open-World Adventure; The Combat Mechanics Have Been Revised

Origins’ massive open-world is confined within Ancient Egypt. Players will take on a whole host of main and side missions as they travel on-foot, via boat and on the back of a horse or camel. The main areas you’ll navigate are Alexandria, Kyrenaika, the Nile Delta, the Siwa and White Desert, the Giza and Memphis and Faiyum.

One of the series’ returning features that will help you scope out these locations from above is “Eagle Vision.” Bayek’s eagle Senu can be actively controlled as you scout a specific area and highlight key targets and enemies. Origins’ huge open world features thriving communities of people who go about their daily business, various animals and predators that can be tamed, tomb raiding, naval combat and underwater exploration.

Past Assassin’s Creed entries relied on a combat system that played out via predetermined animations. Origins does away with that style of play and instead incorporates more action RPG-like mechanics. Bayek can use a nice variety of melee weapons that strike whomever’s in his weapon’s hit box. Bayek can also utilize different bow & arrow configurations, plus other types of items that heal him or poison incoming foes.

Your enemies’ strength can be taken note of via the health meter and numerical level icon sported above their head. For enemies who’re weaker than you, you can pull off stealth attacks that instantly kill them. But foes that are stronger than you won’t succumb so easily to sneak attacks. Check out the video above to watch how battles unfold and how arena challenges play a huge part in how you’ll progress.

3. Players Can Expand Their Knowledge About Egypt Through Discovery Tour

In past Assassin’s Creed games, players could delve deeper into its real-world explanations of people, places, things and events via the Database. Origins will expand upon that feature by offering players the chance to explore Egypt (non-violently) through Discovery Tour. This dedicated portion of the game features guided tours curated by real-world historians and Egyptologists. This digital trip through Ancient Egypt will expound upon topics such as the Great Pyramids, the practice of mummification, people’s customs and more. Discovery Tour will be available as a free download sometime in early 2018.

The Hidden Ones: This story-driven expansion builds upon the growth of the Brotherhood, taking players years after the events of Assassin’s Creed Origins as they clash with an occupying Roman force in a new region. This expansion will extend the level cap, allowing players to keep on making their character progress. Available in January 2018

– The Curse of the Pharaohs: In this story-driven expansion focusing on Egyptian mythology, players will fight against undead pharaohs and explore a new, mystical realm. During their journey, players will encounter famed Egyptian beasts such as Anubis warriors, scorpios and more, as they investigate the cause of the curse that has brought the dead pharaohs back to life. The Curse of the Pharaohs will increase the level cap further and introduce brand new Abilities. Available in March 2018

– a package of 500 Helix Credits, Available at the launch of the game

– an exclusive rare weapon, the Calamity Blade. Available at the launch of the game

Origins is obviously a major release for Ubisoft. Which explains why the game is available in several different editions. The central pre-order bonus for each edition is instant access to the “Secrets of the First Pyramids” mission. The Deluxe Edition comes with even more goodies, such as the gear filled “Desert Cobra” Pack and the “Ambush as Sea” naval mission. The Gold Edition comes with everything included with the Deluxe Edition, plus access to the Season Pass and a special SteelBook case.

5. A Special Xbox One S Bundle Comes Packaged With the Game

There’s been a lot of hype surrounding Assassin’s Creed Origins’ Xbox One X visual enhancements. While Microsoft’s next console is launching a month after the game’s release, a special Xbox One S bundle for Origins will launch beforehand. This special package comes with the following: 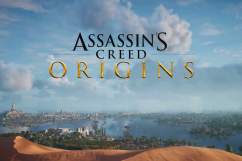