In order to get the Hidden Blade, all you need to do is talk to your wife, Aya, during her quest of the same name. Once you find her in the hidden underground area under the well, she’ll give you the weapon.

Her mission is unlocked once you kill one of the main bad guys in the starting area and are then tasked to meet Aya in Alexandria. The quest menu recommends that you find her at level 10, but you can rush to Alexandria and get the Hidden Blade from her well before you reach that level. Just be sure to avoid the enemies along the way as they’re at around level 10.

Before you get the Hidden Blade, you’ll have to make due with just your fists to take down opponents stealthily. Takedowns are just as effective at putting opponents out of commission as assassinations, however enemies writhe on the ground meaning you can’t pick them up and hide them like you can with dead bodies. You also can’t booby trap the body with the Decay Flesh tool. Try to take down opponents while both you and the enemy are in bushes or tall grass so their bodies stay hidden. This can be done by attracting the opponent via whistling by pressing down on the directional pad.

For a more permanent way to take down enemies at close range before you get the Hidden Blade, get the charge weapon skill. Then get behind unaware opponents in the range that allows you to trigger takedowns, charge up an attack with your weapon, and then kill them that way.

Other options include sniping opponents with bows. Just be sure you have enough ammo to shoot people and finish them off if they don’t die on the first hit.

You can also take care of opponents using sleep darts unlocked in the Seer skill tree. They put low ranking opponents to sleep temporarily allowing you to take them down and stun them indefinitely. They also briefly stun high ranking opponents. 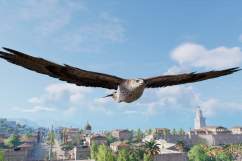