Stealth is the most important tool you have as an assassin in Assassin’s Creed Origins. But how do you become the stealthiest assassin in recorded history? Well this guide will help you out.

Guards don’t take to kindly to discovering dead bodies. Be sure to hide the body in bushes or tall grass or just somewhere out of the way.

Bushes are your best friend when infiltrating a camp. Bushes allow you to break the line of sight of enemies so you can safely sneak around. If you lure an opponent by whistling (pressing down on the D-pad), you can then assassinate them and then keep the body out of sight right then and there.

Many opponents are strong enough to survive an assassination attempt. In order to ensure you take them down, you can try poisoning them to lower their health.

This can be done safely by throwing a poison dart at them. You can also apply the Decay Flesh tool on a dead body and then have an enemy intentionally find them to poison and temporarily stun them. Both of these abilities are unlocked in the Seer skill tree.

You can use your feathered friend Senu to scout opponents from the sky, marking them so that you know their locations at all times.

To increase Senu’s perception and make scouting easier and more efficient, go to high points (market on your map) and perform a synchronization. This also creates fast travel points and also reveals the locations of resources for crafting.

You can unlock an ability that allows Senu to distract enemies briefly while you’re scouting. Activating this skill automatically brings control back to you so be sure you’re close to the opponent.

6. Get Help From Other Animals

Senu isn’t the only animal that can help you. Some camps can have caged predators. You can either unlock the door and risk being attacked or try to shoot the lock with your bow. This is a great way to distract guards.

Progressing in the Seer skill tree allows you to tame animals. All you have to do is put an animal to sleep with a sleep dart and then tame them with the indicated button prompt.

If you’re spotted in a camp, guards will activate an alarm to call for reinforcements. You can prevent this, as well as catch an unlucky enemy off guard, by booby trapping the alarm. You can find it easily using Senu.

8. You Can Make Enemies Attack Each Other

By using the Berserk ability, you can make an unaware enemy turn on other enemies. This is a great way to help clear out small groups of enemies. Just be sure to hide after making an enemy go berserk or they’ll attack you.

Making an opponent go berserk in a camp will trigger the alarm. Be sure to booby trap it before that happens.

It’s only effective on enemies that are unaware so don’t try to use it in the brief window time freezes when your caught. Just take down the enemy instead.

9. Bows Are Your Best Freinds

One of the best ways to assassinate opponents stealthily is to snipe them from afar. Predator Bows are best for this as their scope makes them easy to aim and they have long range. You can also unlock a skill that allows you to control the path of the Predator Bow’s arrow while it’s in midair.

10. Upgrade Gear Whenever You Can

Blacksmiths in towns allow you to upgrade your weaponry in addition to buying new weapons. This means that if you have a bow with a great ability, you can upgrade the weapon so it doesn’t get outclassed by the other gear you find.

You not only have to upgrade your weaponry but your armor as well. That way you can increase damage dealt with your hidden blade and arrows as well as increase how many arrows and tools you can carry.

Upgrading weapons costs money while upgrading armor costs resources. Both can be found by ambushing travelling convoys. Have Senu find convoys for you. They’ll most likely be on horseback so hop on your mount and attack them with a spear or staff. 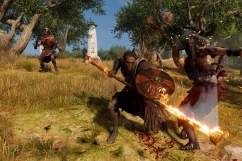