Destiny 2 is almost here for PC owners after an extra month and a half of waiting. Whether you’ve been holding out for the PC version or you’re double dipping with this version, you’ll surely find a lot to love with this version.

Although Bungie hasn’t created a PC game in quite some time, you’ll be pleased to hear that this title is very well optimized across all of the different hardware combinations out there. Nvidia went through some great lengths to find out what will be the best card for a 1080p resolution and 60 frames-per-second. Since this is Nvidia doing the testing, you won’t find an AMD equivalent in their findings.

Nvidia has found that the best GPU for a 1080p resolution with 60 FPS is in fact the GTX 1060. This shouldn’t be all that surprising since it is the recommended GPU in terms of specs. What is surprising is how well the GPU will run this game. Nvidia says with the detail level on Highest, Destiny 2 will still push well past 60 FPS. In fact, the hardware giant has found that you’ll get anywhere between 70-100 FPS with an average of 87.1 FPS. This is great news considering the price point of this card and it’s popularity in new rigs today.

The GeForce GTX 1060 6GB, recommended by Bungie, is also our recommended graphics card for 1920×1080 Destiny 2 gameplay. That’s underselling it a smidge, however, because the GeForce GTX 1060 is a rock star in Destiny 2, running at the game’s “Highest” preset, sans DSR-style supersampling, at 70-100 FPS, for an average of 87.1 FPS.

If we had to make a comparison for those of you out there who are Team Red, we’d probably have to suggest the RX 480/580. Both of those cards are often compared to the GTX 1060 so it makes sense to recommend those cards. Keep in mind that we didn’t do any testing with the AMD cards so we can’t absolutely confirm their performance with certainty.

To prepare for the launch of Destiny 2, Nvidia has offered their latest Game Ready driver to help eek out some extra performance when the title launches. You can count on AMD to do the same thing as well before the official launch. You can check out Nvidia’s write-up about Destiny 2 on PC and learn the best ways to maximize your performance on your rig. The team goes into great detail about what features will do what in terms of giving you extra FPS. 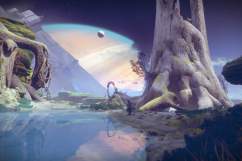 Read More
Destiny 2, PC Games
Here's how to get the best 1080p performance.