GUNDAM VERSUS Launch Trailer | PS4GUNDAM VERSUS is finally here! With over 90 different playable mobile suits, lightning fast 2 vs 2 battle action, and a battle engine built from the ground up for the PS4, GUNDAM VERSUS will put your strategy, drive, and teamwork skills to the test. Jump in and pilot your favorite mobile suit today! Pickup GUNDAM…2017-09-29T15:00:00.000Z

Fighting with giant robots is just a fun activity for folks of any age. Hopping into the cockpit of a massive mech and laying waste to other jet-boosting bots never grows old. In the world of manga/anime, the Gundam franchise has stayed strong due to its strong storytelling, glorious animation and most importantly, its wide array of flying Mobile Suits. Bandai Namco has done an incredible job of producing games that remain faithful to the manga/anime properties its based on. While the more action-based beat ’em ups based on Gundam have been decent diversions, Japan has been treated better on the games front with the franchise’s fighting games. Thankfully, Gundam Versus has been brought over to American shores. After spending countless hours slashing and blasting rival mechs, I’ve become even more addicted to the game’s explosive battles.

The most devoted Gundam fans will be more than pleased with the attention to detail seen in every part of this fighter. Hundreds upon hundreds of Mobile Suits have been lovingly recreated from the series’s numerous spin-off’s. Every mech from the classic RX-78-2 Gundam to the AGE-1 Gundam AGE-1 is playable or represented as an assist character. Even non-fans who just want a game that gives them the thrill of playing Virtual-On again will eventually fall in love with everything Gundam. The fan service provided here is off the charts – classic theme songs blare out during fights, Mobile Suit pilots blurt out random commentary and additional characters can be chosen to fill the role of main menu avatars. You’d be right in thinking that a fighter with over a hundred characters would be filled with uninspired movesets. Luckily, Gundam Versus‘ array of robots are different enough to inspire you to pick a fave and master their offensive arsenal.

GUNDAM VERSUS: Gundam Wing | Character TrailerOperation Meteor is now underway. Choose from #WingGundam, Deathscythe, Heavyarms, Altron, or Sandrock and fly to earth to fight against OZ. Which mobile suit will you choose? #GundamVersus is out TODAY! Suit up and show us you have what it takes to be a Gundam pilot. Pickup GUNDAM VERSUS today: Digital: bit.ly/2wnmr77 Retail: bit.ly/2fCiNTV Follow…2017-09-29T17:00:02.000Z

From a mode standpoint, the multiplayer options are incredibly fun and varied. It’s possible to hop into 1v1, 2v2 or 3v3 battles that are pleasant (as long as your connection is strong). Along with those competitive modes, you can also align yourself with a human partner and hop into the enemy wave-based Ultimate Battle mode. From a single-player standpoint though, Gundam Versus isn’t as strong as its multiplayer component.

The Trial Battle mode throws you into an arcade mode-like ladder that begins with a short scene that reflects the Gundam story arc you just hopped into. Instead of featuring climactic battles that lift elements from the series and provide some backstory for new fans, you’ll be thrown into random fights. A game such as this one would be much better off including a focused campaign mode that displays the best moments of Gundam in an active and cinematic manner. Plus playing Ultimate Battle grows a bit tiresome since you’re unable to save your progress in the middle of the more difficult waves.

Gundam Versus‘ battle mechanics stick to the mantra of “easy to play, hard to master.” Each Mobile Suit can boost, pull off ranged/melee attacks, call in an assist and tap into a super powered mode that makes them even more formidable. While some of those actions are smartly attached to the face and shoulder buttons, a few commands are activated via strange actions. Blocking by tapping the up and down button on the D-Pad is unreliable since the fast battles won’t really give you the chance to slow things down to pull that motion off. Plus boosting up into the air via the right analog stick is problematic, too. After spending time learning the ins and outs of this fighter, I’m sure most players will be better off ignoring those moves and mastering the more reliable ones.

Gundam Versus continues Bandai Namco’s trend of releasing quality games based on popular manga/anime properties. Diehard followers of the ongoing Mobile Suit wars, plus franchise newcomers have a lot to appreciate here. There’s a huge array of beautifully crafted bots to choose from, the battles are always boisterous and Gundam’s history is represented faithfully. While the more solo-focused modes could be a lot stronger and some of the controls can be confusing, the strong battle mechanics and online modes offer enough fun to keep Gundam Versus in your fighting game rotation. Don’t pass up on this bot-on-bot Gundam fest. 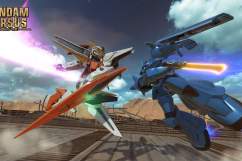 Gundam Versus: 5 Fast Facts You Need to Know

Read More
Anime, Fighting Games, Game Review, Games, PS4, PS4 Pro
Check out this review of Bandai Namco's Gundam Versus to see if porting it over to the US was worth all the trouble.