This title is skipped the PS3 and Xbox 360 and will instead be releasing on the Xbox One, PS4 and PC. Middle Earth: Shadow of War is part of Xbox’s Play Anywhere program meaning a digital copy on Xbox One will also give you a copy on Windows 10 and vice-versa. We have good news to report for console owners as you can begin playing the game when the clock strikes midnight on October 10, for Eastern time at least. The same can’t be said for Steam owners.

On the Steam product page for Shadow of War, it gives us a curious unlock time. This happens a lot with Steam but Steam has done midnight releases in the past so it seems a bit odd not to do it here while the other platforms are receiving a midnight release.

This could possibly means areas of the world like Australia, New Zealand and Japan will get to play the game earlier than other parts of the world if you buy the game on Xbox One since October 10 comes quicker. It looks like Steam will open the game up to everyone at the same time.

Pre-loading is available for Shadow of War so you can purchase it install it before the official release time so you’ll be ready to play as soon as the game unlocks. If you’re curious about the file size for Middle Earth: Shadow of Mordor, click the link below.

Middle Earth: Shadow of Mordor releases October 10 for Xbox One, PS4 and PC. 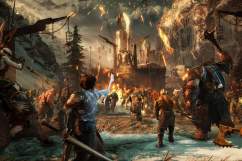