EA’s Need for Speed franchise has been going strong since 1994.

Ever since gearheads and gamers hit the road in each installment, different development teams have taken the series in a different direction to keep things fresh. In 2015, development studio Ghost Games produced a complete reboot that featured a fleshed out story and constant night time racing. Some fans flocked to the game, while others avoided it and lamented it for its always online connectivity issues. Ghost Games went back to the drawing board to keep the best parts of its last work, ditch the bad ones and fine tune the racing mechanics fans still love.

Before Need for Speed Payback launches on November 10, get in tune with everything this racer has in store for you all.

NFS Payback’s story mode takes place in Fortune Valley. This hub locale’s seedy underbelly is controlled by a cartel called “The House.” After getting double-crossed by the criminal organization, three individuals by the name of Tyler Morgan (The Racer), Mac (The Showman) and Jess (The Wheelman) join forces to take it down. The action movie-like sequences you’ll play out will allow you to take control of these characters and utilize their appropriate skill set. Tyler will primarily participate in racing events, Mac’s all about helping transport important VIPs/packages and Jess is more in tune with off-road racing and drifting challenges.

Fans will be happy to know that this entry features a 24-hour day-night cycle and the fact that the single-player campaign can be played offline. Check out the video posted above to get a visual overview of everything you can see and do in Fortune Valley. 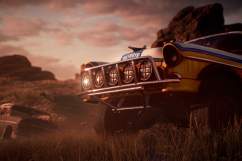 2. There’s Five Car Types to Race in and Fully Customize

Each of the vehicles you’ll obtain are tied to one of five different car classes. Those classes are broken down into Race, Off-Road, Drift, Drag and Runner. You can get a better idea of what the cars from each class are capable of in the descriptions posted below:

– Race: the one must-have car in your collection. Squealing around tight corners or racing down a straightaway – this is the car that can do it all

– Off-Road: need a car that can handle sand, dirt or whatever else you can throw at it? The Off-Road class offers incredible speed coupled with stability in the air and good recovery on landing

– Drift: take twists and turns at incredible speeds with the Drift class. Sweeping mountain roads are the perfect playground for these stylish cars

– Drag: if you love insane speeds, nitrous boosts and the occasional wheelie, Drag cars are for you. Rocket down straightaways in style with this class

– Runner: Runners get the job done. Perfect for when you want to keep a low profile (with their tinted windows, low ride height and missing license plate) or outrun the law

3. Fortune City is Packed With Several Places to Visit and Vehicles to Discover

Fortune City is comprised of four main areas – Mount Providence, Liberty Desert, Silver Rock and Silver Canyon. Each locale plays host to a number of activities you can do. Besides the single-player campaign, you can also participate in multiplayer “SpeedList” challenges. As you complete events around the city, you’ll amass more cash for cars and gain a better reputation. New cars can either be purchased or found in hidden locations, while new vehicle parts can be won or bought. When it comes to car customization, you can tune pretty much every part of your rides. Visuals enhancements and under the hood work can be done on any car you acquire.

Driving in style and being the ultimate risk taker has positive and negative effects on your progress. For instance, taking on side bets and and successfully completing them nets you extra funds. Plus the Autolog feature returns, which lets you challenge other players’ leaderboard completion times for events. You’ll need to keep a close eye on your Heat Level as you speed through Fortune City, though. As it increases, the more severe the opposition will be from the local police. Be prepared to deal with roadblocks such as police cars, helicopters, Rhino units and hazardous road equipment if you continue to push your luck and tangle with the law.

Pre-ordering either of the game’s two editions will grant you access to the “Platinum Car Pack.” That DLC bonus pack comes with the following gifts:

5. The Deluxe Edition Comes With Tons of DLC Bonuses and Early Access to the Full Game

If you’re itching to play NFS Payback before its official launch date, pre-ordering the Deluxe Edition is the right move to make. Along with 3-days of early access to the game, the Deluxe Edition comes with the Platinum Car Pack, the Story Mission Pack, exclusive customization items, a 5-percent Rep Bonus and a 10-percent discount on all in-game content.

Buy the Deluxe Edition of Need for Speed Payback here.