Update: The press release sent to Heavy said that Ty is named Tyler “Ty” Ramirez – as we reported – when his actual name is Tyler “Ty” Morgan. We corrected our article accordingly.

A new story trailer for Need for Speed Payback shows off some more of the game.

A press release sent to Heavy also provided a description of each of the three characters you play as.

Tyler “Ty” Morgan, also known as The Racer, is a specialist in drag and street races. A natural born racer, Ty has an unwavering will to win. Once his crew are betrayed, payback becomes his one and only concern.

Jessica “Jess” Miller, aka The Wheelman, spends her time running high-risk, high-reward jobs yet never loses her head. She can get out of any situation and is always willing to protect her friends.

Sean “Mac” McAlister, aka The Showman, is as unpredictable and flashy as his off-road races and drifting. He never wavers around a tight corner or fears getting dirty on the trail. Even during hard times, his happy-go-lucky attitude keeps the crew pushing forward.

Check out more about the game’s characters on the Need for Speed blog.

As Heavy reported earlier, Need for Speed Payback will feature a 24-hour day/night cycle and a single player mode that can be played offline. There are five car types that are fully customizable: Race, Off-Road, Drift, Drag, and Runner. In the game, you’ll be taking back Fortune Valley from a cartel known as The House through a variety of missions and explosive set pieces, amassing cash and cars as you go.

The Need for Speed franchise goes all the way back to 1994 with Road & Track Presents: The Need for Speed. Since then the franchise has seen development from a long list of developers including Criterion Games, Eden Studios, EA Black Box, and Ghost Games. The last entry in the series was the 2015 reboot Need for Speed. The series even received a movie adaptation with Need for Speed in March 2014, which starred Breaking Bad’s Aaron Paul along with Dominic Cooper and Scott Mescudi. 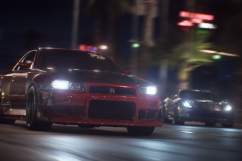 Need for Speed Payback: 5 Fast Facts You Need to Know