When Host Andrea Rene asked Gonda what it felt like to win the tournament, he said he was always the runner up in competitions but today he won.

Gonda competed against Numbers in a round to see who could collect the moons first in Super Mario Odyssey in a series of three challenges. The competition was very close as both competitors were at the final boss of the challenge in which they had to capture its hands and make it punch itself in the face.

Doug Bowser, Senior Vice President of Sales & Marketing at Nintendo of America, handed out the rewards.

Gonda, who goes by Ito in Super Smash Bros. for Wii U competitions, is widely considered one of the best Meta Knight players in North America consistently earning high spots on ranked leaderboards according to Smash Wiki.

He was originally from Oakland, California and moved to San Diego for school.

Journalist and What’s Good Games Host Andrea Rene was the host for the event while Nintendo E3 Tournament Announcer Jordan Kent was the play-by-play announcer. 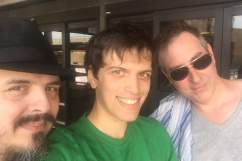