And here’s more Pokemon confirmed to receive increased spawns by the event’s trailer:

We also anticipate Murkrow and Crobat to receive increased spawns, but we have yet to confirm it. In addition, you can also catch special versions of Pikachu, Pichu, and Raichu wearing witch’s hats.

In addition, your Buddy Pokemon will earn Candy twice as fast and you’ll get twice the Candy for catching, hatching, and transferring Pokemon.

Special boxes will also be available in the in-game shop just like during the Equinox event offering a variety of useful items.

You’ll also be able to dress up your Avatar in a hat styled after Mimikyu. All you need to do to dress yourself in the hat is tap on your trainer icon, go to the style menu, go to the hat category, and it should be among the hats that you own and can select from.

Original Story: The Pokemon Company teased the arrival of a new Halloween event for Pokemon Go with an article on the official Pokemon website.

They said that plenty of good stuff is coming to the game later this October and that they can’t wait to get out and “see what sort of excitement we can scare up while catching new Pokémon to fill out our Pokédex.”

Now this could just mean the excitement of catching Pokemon that weren’t previously caught before. Since last year’s event made Ghastly, Haunter, and Gengar more common, then maybe Misdreavus from generation two will also be added to the lineup. But many believe that this could allude to the arrival of brand new Pokemon from generation three.

This seems likely given that the existence of generation three Pokemon (the ones from Pokemon Ruby, Sapphire, and Emerald) was found in the games code during a datamine of the 0.71.0 version of the game last August. A list of the names for all 135 Pokemon from the generation were found in the game’s code including the names of legendary Pokemon like Deoxys and Jirachi. A list of 73 new candy families was also found. There was no evidence of sound files or new moves, however.

The existence of Generation two Pokemon (from Pokemon Gold, Silver, and Crystal) were added to the game on February 16, 2017 and the existence of them was found by Pokemon Go Hub three months before. So it’s not entirely too far fetched to expect gen three Pokemon soon. However, we also have to keep in mind that gen two Pokemon were released long after the first Halloween event. If gen three Pokemon do get released, then we can expect Shuppet, Banette, Duskull, Dusclops, and Sableye to join the list of ghost types appearing more commonly.

There’s also a rumor that Dark Pokemon will be added to the list of Pokemon more likely to be encountered, according to a source who spoke to Slash Gear. This means that the gen two Pokemon Umbreon, Murkrow, Sneasel, Houndour, and Houndoom as well as the gen three Pokemon Poochyena, Mightyena, and Absol could also be included.

Many other Pokemon that weren’t ghost types received increased spawns during last year’s Halloween event, including Cubone, Marowak, Drowzee, Hypno, Zubat, Golbat, and Meowth. So it’s possible that other “spooky” Pokemon will be included this year.

The Halloween event last year also granted players extra candy for catching, transferring, and hatching Pokemon. We can expect this bonus to return as it’s in the spirit of the holiday.

The Halloween Event last year was the very first timed event for Pokemon Go. It was teased on October 21, 2016 and then announced on October 24. The event began shortly after on October 26 and lasted through November 1. So we predict that this year’s Halloween event will start close to last year’s time. Even though this year’s event was teased earlier than last year’s, it wouldn’t be likely to begin a couple of days later since – well – how can you have a Halloween event and not have it take place around Halloween?

This is all speculation at this point, but once an official announcement drops we’ll be sure to give an update. 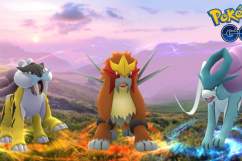