Halloween is coming early for Pokemon Go this year.  In the second annual (can we call it that yet?) Halloween event, Niantic is introducing some generation three Pokemon into the fray.

It seems like a fair assumption to say the same thing will happen this time around with those Pokemon including the new ones we’ve seen in the trailer. The new Pokemon we should be seeing more of this time will likely be the list above and then the following list. Of course, we won’t know 100 percent until the event actually launches and we see proof of players catching these Pokemon.

Pokémon GO – Spooky Pokémon Sableye, Banette, and Others Arrive in Pokémon GO!Gastly, Drowzee, Cubone, and other spooky Pokémon are back again this Halloween, and this time, they’re bringing some special friends! Sableye, Banette, and a few other Ghost-type Pokémon originally discovered in the Hoenn region will be making their first-ever appearance in Pokémon GO. The rest of the Pokémon first seen in the Pokémon Ruby and Pokémon Sapphire video games will gradually arrive starting as early as December! We hope Trainers enjoy this special Halloween treat. The Halloween celebration will start on October 20 at 12:00 P.M. PDT and run until November 2 at 1:00 P.M. PDT. A special Pikachu will be out celebrating Halloween in an all-new costume, and you can, too! Dress up your avatar for the occasion by wearing Mimikyu’s Disguise Hat. You’ll also earn extra Candy while you’re out trick-or-treating with your Buddy Pokémon: Candy rewards from catching, hatching, and transferring Pokémon will be doubled, and your buddy will find Candy twice as fast during the Halloween celebration! Last but not least, you’ll have the opportunity to stock up for your upcoming adventures with special boxes from the in-game shop, featuring items such as Raid Passes and Super Incubators. Follow our Product Updates: http://pokemongolive.com/en/ Follow us on Twitter: https://twitter.com/PokemonGoApp Like us on Facebook: https://www.facebook.com/PokemonGO/ Follow us on Google Plus: https://plus.google.com/+pokemongo Follow us on Instagram: https://www.instagram.com/pokemongoapp/ Subscribe to our YouTube Channel: https://www.youtube.com/pokemongo © 2016-2017 Niantic, Inc. © 2016-2017 Pokémon. © 1995-2017 Nintendo/Creatures Inc./GAME FREAK inc.2017-10-19T12:58:27.000Z

These Pokemon have been shown off in various art for the game so we should be seeing these Pokemon show up for Halloween. We know we’re getting some Gen 3 Pokemon but we don’t know the entireity of what’s coming in terms of the third generation.We’d love to see Poochyena, Mightyena or even Absol show up. These are all Dark-type Pokemon and are also from Gen 3. Murkrow seems to be showing up so why not any of these?

Niantic said the rest of Gen 3 will begin rolling out in December so it’s possible we could just see these five Ghost-types and then have to wait a while until more Pokemon begin rolling out.

The rest of the Pokémon first seen in the Pokémon Ruby and Pokémon Sapphire video games will gradually arrive starting as early as December! 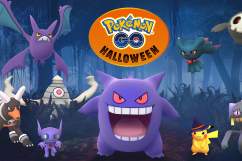 Pokemon GO: When Does the 2017 Halloween Event End?