Roblox is adding a bunch of new features to their Virtual Reality functionality, according to an email sent to Heavy.

The Comfort Cam makes the in-game camera stationary as opposed to following the player’s avatar as they move around. As soon as the player stops moving, the camera will automatically teleport to the new position. Roblox’s PR told Heavy via email that you still have complete control over your player avatar by using the d-pad or analog stick. Players can also manually reset the camera position while their avatar is moving with the Left Trigger.

“What’s great about this control scheme is that it allows players to enjoy a comfortable VR experience with the widest set of possible hardware and it doesn’t require developers to custom build their own VR controls,” Roblox’s PR said.

In addition, Roblox will release the VR Toggle, allowing players to toggle VR Mode on or off while a Rift or Vive headset is connected to the computer.

They will also have a VR Radial Menu that grants easy access to the player list, notifications, backpack, and more.

Oculus Rift functionality for Roblox released in April 2016, and other VR platforms shortly followed. VR functionality on Roblox is fully cross-platform, allowing players on the Oculus Rift, HTC Vive, PC, and mobile devices to all play together in the same game server. VR works with every game on the service, however Roblox’s PR said that certain games lend themselves a little better to the device than others. Games specifically designed with VR in mind are being created all the time, and looks especially impressive in first-person mode according to Roblox’s PR.

Roblox’s PR told Heavy that players have been very happy with the VR experience thus far. However they wanted to further enhance the user experience as the technology continues to advance.

They told Heavy that Roblox’s engineering team had two big challenges with designing a camera and control system for VR: how do you provide players with a confortable game experience and how do you prevent giving VR players any advantages over players on other devices? While teleport-to-move is a common tactic in VR games, in which the player warps to areas of the map instead of moving around the game world in order to prevent motion sickness, it’s not ideal for the multiplayer environment of Roblox as users on VR would move faster than non-VR players.

Roblox currently has more than 64 million monthly active players according to the email. 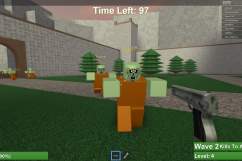