The Star Wars Battlefront 2 beta is out today for those who pre-ordered the game. This gives most players their first crack at the new gameplay and the sequel to 2015’s reboot. A lot has changed with this title which should help win some fans over who were turned away from the previous game.

The multiplayer beta allows players to try out the new Galactic Assault mode, Starfighter Assault and Strike. Different challenges will be available each day in the beta so make sure to keep checking back each day it is active.

Unfortunately, the progress you make in the beta will not carry over to the full game when it releases in November. However, every player that participates in the beta will receive a specially curated “Founders Crate” that will be carried into launch, filled with items as a thank you from the developers, including credits, an exclusive emote for Darth Maul, and a rare trooper Star Card to get a head start in battle.

At this point, you’re probably wondering what the level cap is for the beta since progress carries over. Unfortunately you can’t just keep playing until you hit the official cap, whatever that may be. Instead, the beta will stop your from gaining levels at level 10. You can keep playing to unlock credits and get new items but you’ll no longer rank up after hitting level 10.

You can keep playing and level up all the different classes since those use a separate rank than your overall one. While reaching rank 10 on your profile doesn’t take all that long, it will take a lot longer to reach rank 10 on all four of your classes plus the starfighters. You can even level your heroes up so there’s a lot of content in this beta in terms of leveling up different classes and characters. Whether you’ll be interested in playing the same maps and modes over and over to do so is an entirely different story.

The Star Wars Battlefront 2 beta will run until October 9 at 4 p.m. UTC or 12 p.m. ET and 9 a.m. PT. The official release date of the game is November 17 for Xbox One, PS4 and Origin on PC. For bonus goodies, you can opt for the Elite Trooper Deluxe Edition which will help get you a head start on the competition on November 14. 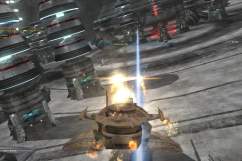