In a surprise to be sure, but a welcome one, Star Wars Battlefront 2 (2005) revived its online play today through GOG Galaxy. This update applies to both Steam and GOG players and also allows for crossplay between the two platforms. This update comes at a curious time as it’s right before the other Star Wars Battlefront 2 open beta is set to begin. Whatever is going on, we’re glad it’s happening.

The team is aware of this issue and it is currently being worked on. A GOG representative confirmed this in a forum post.

We are investigating the issue, it is most likely related to the matchmaking servers being hit with much bigger traffic than anticipated. We will try to resolve this as soon as possible.

We’re as excited to jump back into multiplayer after all these years as you are. This update was posted three hours ago at the time of this writing and the issue is still appearing for us at least. Players are reporting fixes by hovering over the cancel button but obviously your mileage may vary. It worked for us so it might work for you.

If you want to jump back into the vast world of Battlefront 2, you can do so on GOG for $3.99 as part of the Disney completion sale. Buying games on GOG guarantee a DRM-free version which means you don’t have to activate anything or have an online connection.

Battlefront 2 (2005) features a storyline centered around Darth Vader’s 501st Legion of Stormtroopers, also known as Vader’s fist, something the reboot has omitted. Luckily, the sequel to the reboot will include a brand new storyline that is completely canon and will help bridge the gap from Return of the Jedi to The Force Awakens.

We’ll keep you updated on whether this issue sorts itself out either today or tomorrow. 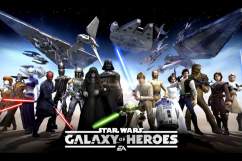 Read More
PC Games
Where are those droidekas?