Disney/Lucasfilm Daisy Ridley as Rey in The Last Jedi.

A long time ago in a galaxy far, far away… there used to be a healthy sampling of video game tie-ins to the Star Wars movies. This has been happening back as long as we remember and it even happened with A New Hope. Sure it took a little longer but who doesn’t remember playing the painfully tough Star Wars game on the NES?

We later received a SNES port of the game called Super Star Wars and also got Super Empire Strikes Back and Super Return of the Jedi. While these games are mostly known for being super hard, they also give many people fond memories as they look back to their adolescent days. There were plenty of games set during the original trilogy so don’t just get to thinking these were the only ones.

Fast forward to 1999 and the movie that was a victim of its own hype, The Phantom Menace, and we get even more movie tie-in games. It can even be argued that Episode I actually received the best of the tie-in games. We received the podracing game, Jedi Power Battles, Battle for Naboo, an actual movie game and Star Wars Obi-Wan. Obi-Wan gets a bad rap but I found it be be a pretty solid game, despite the wonky controls. The game released as an Xbox exclusive and controlling your lightsaber was done by moving the right analog stick.

Moving forward to Attack of the Clones and we receive an official tie-in game for the Game Boy Advance and Star Wars: The Clone Wars which was a vehicle-centric take on the start of the Clone Wars. We also got a second Game Boy Advance game but the less said about that the better. This represents a significantly smaller portion of games than Episode 1 received.

By Episode 3, the video game tie-ins have already all but died out. We received the surprising good Revenge of the Sith tie-in game but that’s it. The Clone Wars tv series had several tie-in games and then the Disney takeover happened.

Since the takeover, we haven’t seen any movie tie-in games outside of Lego Star Wars: The Force Awakens. With technology and the ability to make these games more abundant than ever, it seems a little surprising that nobody has tried to make another movie tie-in game. Admittedly, most movie tie-in games are pretty bad but Star Wars has proven to have an established fan base.

Take Star Wars Battlefront (2015) for example, this game was heavily criticized for its Season Pass structure and received mixed reviews as a result. However, the game still went on to sell over 10 million copies, making the game an overwhelming success. Don’t you think it’s possible that a The Last Jedi tie-in game could sell well?

Maybe fan interest in movie games have died out but with the sudden explosion of new Star Wars movies every year, it’s possible interest has been renewed the series once again. There are now three generations of fans out there who are Star Wars fans – you have the parents who saw the Original Trilogy in theaters, their kids who grew up with prequels and now you might even have their kids who are growing up with the Sequel Trilogy.

While we’re not begging for a new movie tie-in game (help me Obi-Wan Kenobi, you’re my only hope) we would certainly like to see one. Having Star Wars Battlefront 2’s single-player campaign fit in to the overall narrative of Star Wars is certainly a start but I want more. And I know I shouldn’t.

You can see how the movie games begin to die out over time with them almost grinding to a halt with Revenge of the Sith. We’re still getting a lot of books that tie-in to the grand scheme of things but what about video games? I’d certainly love to see a mediocre The Last Jedi game just so I can relive my dreams again.

Shoutout to Wikipedia for doing all the heavy lifting, here’s the list of tie-in games for each Star Wars movie. This doesn’t even count the titles like Rogue Squadron or Starfighter, either. 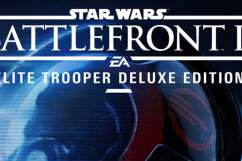 Episode V: The Empire Strikes Back

Episode VI: Return of the Jedi

Episode I: The Phantom Menace

Episode II: Attack of the Clones

Episode III: Revenge of the Sith