Super Mario Odyssey is Mario’s latest 3D adventure and this journey takes us to the Nintendo Switch. Nintendo’s portable hybrid console has some unique playing styles available for those who own one. One of these ways is playing with a Joy-Con flipped to its side, which is how you’ll be playing multiplayer in Super Mario Odyssey. This method also works with a Pro Controller and Joy-Cons, or having two Pro Controllers, but the game says to use tow Joy-Cons.

Getting multiplayer set up is actually really simple. Once you’re in the game, all you have to do is pause the game and select “Two Players” to bring up the prompt to play multiplayer. Alternatively, you can choose to continue in two player mode once you start the game up again for a second time.

The multiplayer mode in Super Mario Odyssey is actually pretty cool. One player continues to control Mario while the other one controls Cappy. In the multiplayer mode, Cappy is always floating above Mario’s head and the player controlling Cappy will have the ability to fly wherever they please and destroy enemies without having to be thrown. That’s right, Cappy has the ability to fly freely and away from Mario at any time. It adds a new twist on the Super Mario Odyssey gameplay that is sure to be fun for everyone involved.

The player who controls Cappy will still have the ability to possess enemies and objects but that will actually end up shifting control back to Mario. If you were hoping Cappy would give you the ability to control a Goomba, we’re sorry to break the bad news.

Interestingly enough, playing with a single Joy-Con does not make the game unplayable by any means and will still give you the same gameplay you know and love. You might end up missing out on a few motion control options such as tossing Cappy and doing the spin attack with Cappy but it’s a necessary loss to take unless you have a Pro Controller on hand.

Super Mario Odyssey is out now exclusively for the Nintendo Switch.

Stay with us for more Super Mario Odyssey content and keep it right here for more gaming coverage from Heavy. 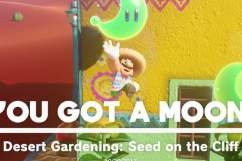