Once you have killed the Snake, you should head off to kill the Scarab.

After completing the initial quest for the Scarab, head to Letopolis and talk to a man named Taharqa. You’ll then be placed into a long gauntlet of enemy encounters, so be sure to have an adequate melee weapon at the ready. You have the help of Taharqa and his band of men, so just focus on one enemy at a time and leave the rest to the other fighters. Try using tools like the Poison Darts whenever you can.

Afterwards, you’ll have to help Taharqa clear out a bandit camp with his friends. Just clear out the camp just like you would any other camp.

After you help Taharqa, he betrays you and leaves you in the desert. Turns out he was the Scarab all along. Call for your horse when the prompt appears to get out.

You’ll have to sneak into the nearby enemy camp to get your gear back. Go past the tower and enter the building with your gear from the side. Be sure to not get caught by any of the guards as you only have your hidden blade on you. Once you grab your stuff, grab the nearby treasure and head back to the Temple of Horus to kill Taharqa.

Now Taharqa likes to hang out in the temple itself surrounded by guards, but there is window access to the upper level allowing you to snipe him and guards from above. Taharqa also likes to leave the temple and move along the south side of it, so clear out the guards along and on top of the walls before you try and kill Taharqa. Then just take him out using whatever tactics you’re comfortable with.

Take advantage of the bushes around the area. They allow you to break the line of sight of enemies so you can safely sneak around. If you lure an opponent by whistling (pressing down on the D-pad), you can then assassinate them and then keep the body out of sight right then and there.

Since Taharqa is pretty strong, you can try poisoning him to lower his health and make him easier to kill with the hidden blade. This can be done by throwing a poison dart, using the Decay Flesh tool on a dead body, or using a weapon that has a chance to poison on hit. Poison tools are unlocked in the Seer skill tree. Weapons with a chance to burn or bleed are also very useful.

You can also unlock an ability that allows Senu to distract enemies briefly while you’re scouting. Activating this skill automatically brings control back to you so be sure you’re close to the opponent. To increase Senu’s perception and make scouting easier and more efficient, go to high points (market on your map) and perform a synchronization. This also creates fast travel points and also reveals the locations of resources for crafting. 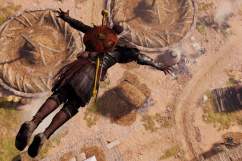