It has been a tumultuous couple of months for Destiny 2. Lots of hype surrounded the game upon release but several players quickly complained about the lack of things to do in the endgame and that Bungie was silent when the players needed them most.

Today was supposed to mark the final of three live streams showing off the upcoming Curse of Osiris DLC pack but that was cancelled in favor of a blog post. The post was written in part to show players the developers are listening to the concerns of the community and that updates are on the way.

While there has no doubt been some buzz around the upcoming expansion pack, there has been a lot of focus on quality of life changes that needed to happen in the game. Just taking a quick glance at Destiny’s subreddit will show you that players have been begging for some sort of communication for quite some time now.

At the time of this writing, the reaction on the subreddit seems mixed with no clear feelings coming out one way or another. Many users are excited about changes while others aren’t moved by the changes.

The blog post details a series of updates coming to the game in December as well as some plans in the future. One of the standout additions are Masterworks weapons. This new tier of weapon will drop in place of Legendary weapons or you will be able to upgrade any Legendary drop into a Masterworks weapon.

Some key advantages Masterworks have over Legendaries are the ability to track the number of kills you get with the weapon, with a choice between Crucible or overall, and you’ll generate orbs for you and your allies on multi-kills. The Raid and Trials of the Nine will have a very high chance to be Masterworks and if you don’t want that particular weapon.

What will really standout for players is the ability to have exclusive, rerollable stats for Masterworks weapons that will help the weapon truly feel like it belongs to you. The stats are randomly selected from a small pool of stats so it’s possible that number could grow in the future.

Here’s what Bungie wrote about the Masterworks weapons from their blog post:

This isn’t the only thing that is coming to Destiny 2 and you can read much more about the future updates in the blog post here. Whether this is enough to get you excited or bring you back if you’ve stopped playing remains to be seen. Bungie promises to be more open and transparent about their plans in the future and it appears this is a step in the right direction.

Players will likely still find some issues in the weapons system as a whole but the Masterworks system will help put a bandage on it for now. Getting the same Exotic weapon over and over seems like it will still be an issue going into the new year. Weak Exotics will be getting looked at and will possibly become more viable in the future. Love it or it, the Token system still remains in play as well.

Destiny 2’s Curse of Osiris DLC launches December 5 across Xbox One, PS4 and PC, with the Masterworks update coming a week later.  For more Destiny 2 news and coverage, stay with us here at Heavy. 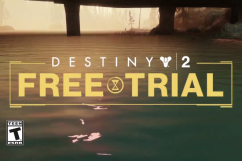