DOOM is almost here and it’s aiming to bring some bloody demon-slaying action to the Nintendo Switch. Acting as one of the first major third-party titles to arrive on this platform, DOOM offers players both an on and offline experience. Much like its PC, PS4, and Xbox One counterparts, this variation of DOOM comes with a full single-player campaign and a robust multiplayer portion so you can frag people online.

If you are looking to jump into DOOM as soon as it’s available the game will officially unlock on November 10 at 12:00 a.m. EST/PST.

This is breaking tradition from other titles on the Nintendo Switch which usually become available at 3:00 a.m. EDT. Once it hits midnight you will be free to kill as many demons as you want. Keep in mind that this game as hefty 22 GB, which will take up at least half of the system’s memory. You will also not be able to opt out of the multiplayer component for the digital version, so make sure you clear some space out on the system.

For the uninitiated, DOOM’s campaign is set in a mining color on Mars that accidentally opened a portal to Hell. Now with demons of all shapes and sizes pouring out, it’s up to a lone soldier to stop these creatures from creating all kinds of havoc. The campaign is roughly 8 to 10 hours long depending on which difficulty you are playing this title on. DOOM also runs as a fairly stable 30FPS and only suffered a minor downgrade in the visual department. However, there are a few bugs such as screen tearing and pop-in textures.

The official Nintendo page for DOOM describes the game as:

Developed by id Software, the studio that pioneered the first-person shooter genre and created multiplayer Deathmatch, DOOM returns as a brutally fun and challenging modern-day shooter experience. Relentless demons, impossibly destructive guns, and fast, fluid movement provide the foundation for intense, first-person combat – whether you’re obliterating demon hordes through the depths of Hell in the single-player campaign, or competing against your friends in numerous multiplayer modes. There is no taking cover or stopping to regenerate health as you beat back Hell’s raging demon hordes. Combine your arsenal of futuristic and iconic guns, upgrades, movement and an advanced melee system to knock-down, slash, stomp, crush, and blow apart demons in creative and violent ways.

It should be noted that if you have played DOOM before the SnapMap feature has been removed from the game. We can assume this was intended to save space, however, this does sacrifice some of the game’s replayability. Thankfully, the Arcade Mode has returned which acts a competitive single-player mode for those who want to perfect their monster slaying skills. Comprised of various sections throughout the campaign, users need to earn points by creatively killing various demons. The higher the score, the more medals you earn and a chance to be placed on DOOM’s leaderboards.

For more guides, news, and reviews make sure to check out Heavy’s gaming section. 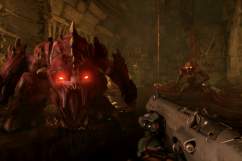