The recent Feh Channel update gave us information on brand new heroes coming to Fire Emblem Heroes. Remember how we got Brave Hero versions of Ike, Lucina, Lyn, and Roy because they were the top voted heroes during the Choose Your Legends event back in January 2017? Now we’re getting new heroes who didn’t quite make it to the top of the list but were still popular choices.

Here’s our in-depth guide on how to make Lute, Mia, and Dorcas into the best heroes they can be and whether or not you should spend the orbs to summon them.

Information on stats from Reddit user xanek. Other research from GamePress.

Lute has very similar stats to Delthea and thus fills a similar role as a hybrid support/attack role. Though instead of buffing teammates like Delthea, Lute debuffs opponents with her huge resistance of 34 and the effects of her Weirding Tome and Res Ploy. This means that all foes within cardinal directions get -5 Speed and Resistance at the start of the turn. Then just clean up the debuffed opponents using her fantastic attack stat of 36 and good speed of 32. Just don’t get too close to opponents or she’ll crumple up like a paper cup.

You can keep Rally Attack/Resistance to help fellow mages take out the debuffed opponents or inherit Draw Back to keep them safe. Fury is great because it boosts all of her stats at the cost of taking damage every turn. Life and Death could work for boosting her attack and speed even more than Fury and without the damage dealing penalty. However it also reduces her defense and resistance making it harder for her to use her Weirding Tome and Res Ploy. Give her Desperation to ensure she isn’t counterattacked and killed off by a bow unit. Use the Deflect Magic sacred seal or simply the Resistance +1 sacred seal for extra protection from mage units. She also works well with a Blade Tome as she’ll get extra attack power depending on how many buffs she receives.

She’s best with a positive IV in either attack or speed and a negative IV in defense.

Pair Lute with other mage units so they can take advantage of her debuffs. She’s also great with red melee units who can counter her weakness to green units as well as any unit that can buff her attack.

Mia is just plain scary. Her Resolute Blade not only grants extra attack (boosting her 32 attack to 35) but 10 extra points to damage when her special skill triggers. Not only that but she gets Flashing Blade which grants her Special cooldown charge +1 per attack if her speed minus the foe’s speed is more than one (in other words, if she’s faster than the opponent). And because she just so happens to currently be the fastest red melee unit at 40 speed, that’s going to happen often. This means that her special skill of Luna will not only be more powerful but will activate sooner. All her other stats are pretty decent too, with her lowest stats being defense and resistance which are only at 28 and 25 respectively which is not too bad.

But we can make her even scarier. Let’s have her inherit Wrath, which grants one lower special cooldown count at the start of the turn if unit’s HP is at 75 percent and lower. It also adds an additional +10 to damage to Specials. Then give her Threaten Speed to ensure that opponents are able to receive her follow-up attacks even if they get buffed by allies. Also add the Quickened Pulse sacred seal to lower the cooldown count even more but for the first turn only.

She’s best with a positive IV in speed or attack and a low IV in either defense or resistance.

Dorcas is very similar to Hector. Not only do they have similar stat spreads (though Hector has higher stats overall except in resistance), but they can both counterattack regardless of distance and both have access to Quick Riposte allowing them to automatically make follow-up attacks if attack at a certain HP threshold (making up for their low speed). However, Dorcas doesn’t have to use up his precious A skill slot like Hector’s Distant Counter and can instead utilize his standard skill of Fierce Stance which boosts attack by six during combat if attacked. He can also move twice as far as Hector, isn’t weak to armor-piercing weapons, and comes standard with Infantry Pulse which reduces the special cooldown count by one at the start of turn one for any infantry allies with at least one fewer HP than him. While Dorcas lacks Hector’s ability to use both Quick Riposte and Vantage as well as his ability to accept the buffs from skills like Hone Armor, he’s still a force to be reckoned with and bested only by strong mage units.

His special skill of Draconic Aura is great as it boosts his already high attack of 35 but you can always inherit Moonbow or Luna. You can also swap out Fierce Stance with Steady Stance for the same skill but boosting his high defense of 35 instead. Then just add Threaten Defense or Threaten Attack to weaken the opponent. Also add the Deflect Magic sacred seal to protect from magic users whose follow-up attacks would otherwise finish Dorcas off.

Dorcas is best with a positive IV in attack and a low IV in speed or resistance.

Pair him with fighters who can take down mages such as powerful and fast bow wielders. Also pair him with healers to keep his HP topped off so that Quick Riposte keeps activating.

This banner is worth summoning from. Mia is already looking like on of the most dangerous units in the game thanks to her ridiculously powerful skills and having the highest speed stat in the game. Lute and Dorcas are also great units that can fill up big gaps in your team. Lute can debuff opponents while also helping to take them down while Dorcas can protect against pesky blue units.

However, you may want to wait until November 27 for the Legendary Heroes Summoning Event as it offers 12 different fantastic heroes including some heroes exclusive to special summoning events like Bridal Cordelia, Bridal Cadea, Spring Xander, and Spring Camilla. It also includes heroes that can be swapped out with the heroes in the Farfetched banner as they share similar roles, such as Ayra for Mia, Bridal Caeda for Lute, and Hector for Dorcas. There will also be an eight percent focus appearance rate as opposed to the usual three percent, though the non-focus five star category will be set to zero percent.

Have any other tips on builds for these heroes? Let us know in the comment section below. 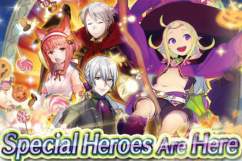