A new update video for Fire Emblem Heroes was released, showing off new heroes, features, and other improvements.

The last Feh Channel update gave us news of Brave Hero versions of Ike, Lucina, Lyn, and Roy, who were the top voted heroes during the Choose Your Legends event back in January 2017. Now we’re getting new heroes who didn’t quite make it to the top of the list but were still popular choices.

The new heroes are Joshua the Tempest King; Lute, the Prodigy; Mia, Lady of Blades; and Dorcas, the Serene Warrior. Lute from The Sacred Stones will get the Weirding Tome which grants three extra speed and gives a speed debuff to opponents in all cardinal directions if they have lower resistance than her. She also gets Rally Atk/Res, HP/Res 2, and Res Ploy 3. Mia from Path of Radiance gets Resolute Blade which grants three extra attack and grants 10 extra damage when her special skill triggers. Speaking of which, she comes with Luna. She also gets Vantage as well as Flashing Blade which gives her Special cooldown charge +1 per attack if her speed minus the foe’s speed is higher than one. Dorcas from The Blazing Blade gets the Stout Tomahawk which enables a counterattack regardless of distance if the unit is attacked. He also gets Draconic Aura, Quick Riposte, Infantry Pulse, and Fierce Stance which grants six extra attack during combat if attacked. The skills for Joshua from The Sacred Stones haven’t been specified yet but you’ll be able to earn him by competing in the Tempest Trials event beginning November 20. Mia, Lute, and Dorcas will be available in their own summoning event starting November 14 at 11:00 p.m. PT / 2:00 p.m. ET.

The presentation also hinted at a new Choose Your Legends event.

Weapon Refinery will let you upgrade weapons to give you passive bonuses to stats. You can choose between four to five different weapon versions that increase stats by different amounts. An enhanced Silver Lance+ for Effie, for instance, can giver her +5 HP and +3 speed or +5 HP and +4 defense. You’ll have to spend Arena Medals from Arena battles and Refining Stones from arena battles, quests, and event rewards. Certain weapons can be upgraded to have additional upgrades, such as Ephraim’s Siegmund having options such as +5 HP and +4 defense or +3 HP and the ability to make a guaranteed follow up attack when HP is at 90 percent and above and attacking a foe that can counter. Sol Katti, Mystletainn, Siegmund, Hauteclere, Fujin Yumi, and Deathly Dagger need Divine Dew to upgrade. Divine Dew is collected by using refining stones to upgrade weapons.

Killing weapons can be upgraded to Slaying weapons which gives them slightly more attack power. Weapons that deal extra damage to armored units, tomes that deal extra damage to cavalry units, and Candlelight can be upgraded to stronger versions just like Killing weapons. You can also upgarde Tyrfing to Divine Tyrfing, Durandal to Blazing Durandal, Aura to Dark Aura, Excalibur to Dark Excalibur, and Naga to Divine Naga.

There will be a new Legendary Hero Summoning Event, with players able to acquire 12 different heroes including some heroes exclusive to special summoning events like Bridal Cordelia, Bridal Caeda, Spring Xander, and Spring Camilla. There will be an eight percent focus appearance rate as opposed to the usual three percent. The non-focus five star category will be set to zero percent. The summoning focus begins November 27th.

Stave users are getting a huge boost. Five star stave users can learn enhanced versions of the same skills they have. For instance, Sakura can learn learn Fear+, which not only inflicts -7 attack on the target but foes within two spaces of the target as well, and Physic+, which restores the HP of the target by half of their attack. The new skills are Absorb+, Fear+, Slow+, Gravity+, Pain+, Panic+, Candlelight+, Physic+, Recover+, Martyr+, and Rehabilitate+.

18 special skills will receive a reduced cooldown. You can see the full list below:

Barracks have also been expanded by 100 for everyone for free. The stamina cost for main story and paralogue maps will be capped at 10.

New story content is coming and it was announced with an epic new trailer. Book two continues the story mode from where the original story and extra chapters left off and involves the Ice Princess Fjorm and the Fire Ruler Surtr opposing each other. The new chapters will be available soon and new players will be able to jump straight into book two.

Fjorm is available to acquire as a five star hero if you complete chapter one of book two. According to what we can see from the Feh Channel footage, her special skill of Ice Mirror appears to completely negate all damage for one attack or at least have higher defense against it similar to other defensive special skills. She’s also available to summon during the Legendary Heroes Summoning Event. 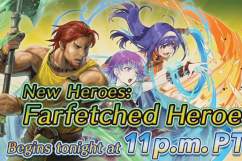