This odyssey is finally at an end. Each team has poured their sweat and tears into this pursuit of victory. To be named champions at the Heroes Global Championship Finals, at BlizzCon 2017, would be the highest honor. Even more it’s an affirmation of all you’ve sacrificed. All the nights you didn’t go out, all the practices, all the planning, and it all comes down to right now. No pressure right, but there’s also a significant chunk of change on the line.

Get ready for the final countdown because the championship begins at 7:30 PM ET and it’s definitely worth watching. Tune in right now because the way these teams breezed through to the finals. This game may get underway even sooner than that. It’s time for the biggest battle the Nexus has ever seen.

What Exactly Is On The Line?

Nine months ago a dream began. This dream was to win the Heroes Global Championship Finals and claim the esteemed position of world’s best in Heroes of the Storm. Five Hundred Thousand Dollars go to the winning team. That’s 100 k per person and that will ratchet up the intensity. At least you might think so if you’re unfamiliar with the two finalists.

Team Fnatic is motivated by more than just money, pride, and in fact it seems they’re empowered by each other. A true team with a fantastic leader in, Quackiniix aka Dob Engstrom. The number one seed in Europe and Heroes of the Storm Mid Season Brawl champions, Team Fnatic is ready to stake their claim as the world’s best.

MVP Black is their opponent. Simply put they don’t lose often, it’s been almost a year and before that even longer. Let’s just say they always feel like the team to beat. It may be that they’re the best team in the world’s toughest region or that they happen to be one of the most technically gifted groups in esports. Either way MVP Black is 14-0 in competitive matches and they’re confident.

This year they’ve shown they aren’t overestimating their own abilities, one of the largest criticisms against MVP Black in the past. They have put in the research on their opponents and they have prepared. Considering they used to steamroll opponents even with a laissez-faire attitude towards scouting; it means Team Fnatic have the most dangerous opponent in the world.

If the shortlist of dangerous opponents starts with MVP Black, then Team Fnatic is written in bold at number 2. They have proven time and again that they are one of the best macro style teams in the world. Gathering experience and using transitions to overcome their opponents before fights even occur.

Does that mean they’re weak in the actual fight? If you think so be prepared because they are one of the single best at extending fights. The constant support of teammates, the direction, and the execution is simply awesome to behold. That is the key to their victory, extending team fights and give themselves a chance to use their creative skills.

Because MVP Black does the opposite. They don’t extend teamfights, in fact they end them before they begin. Amazing at their rotations, MVP Black often brings all 5 teammates to a fight you didn’t even know was happening. Pouncing in an instant and deleting the most dangerous opponent. Instantly turning a fair fight into a one sided 4v5 matchup.

Pursue them at your own risk because they put the future fights on their terms. Taking an early lead, they make you come to them and seamlessly dismantle increasingly desperate opponents. While Team Fnatic excels in controlling the map and gaining an experience lead. They also force their opponents into lose-lose situations.

There may be one thing more hype than the reveal, at BlizzCon 2017, of what’s upcoming for Heroes of the Storm. It’s a battle of the two world powerhouses in competitive play. It’s the best of Europe versus the best in Korea and if you aren’t jumping up and down right now; you don’t have a pulse.

It’s $500,000 for first place or it’s $200,000 for second. It’s a big difference, but even more important to these teams is how they’ll feel next week. There can only be one winner. Was everything you did to get there worth it? Did you achieve all you hoped to? Because if not you’re going to be up at night wondering. Their can only be one winner so it’s time to get ready for a street fight.

Get ready for the ultimate showdown at the Heroes Global Championship Finals and hopefully no one picks the Lost Vikings. 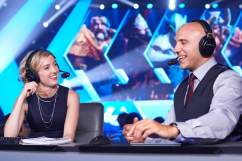