Injustice 2’s Fighter Pack 3 was revealed during the ELEAGUE Injustive 2 World Championship Playoffs. The pack of heroes contains the previously announced Atom, The Enchantresss of Suicide Squad “fame,” and a rather surprising appearance by all four Teenage Mutant Ninja Turtles.

You heard that right. All four. It’s unknown for now if you can select between the turtles before a match, have them swap out with each other mid match, or even have them team up together at the same time.

Whatever the case, fans are super excited. Below is the live reaction to the trailer from inside the Injustice 2 World Championships.

Live reaction from inside the studio for the Fighter Pack 3 reveal featuring Atom, Enchantress, and the Teenage Mutant Ninja Turtles! #Injustice2 @InjusticeGame pic.twitter.com/LEh9DqPfCy

All three fighters are included in either the Ultimate Edition of the game or Fighter Pack 3. Atom will be available for early access starting December 12. The Enchantress will follow in January with the Ninja Turtles appearing in February, according to Comicbook.com.

Injustice 2 will come to PC on November 14.

ELEAGUE is an eSports tournament and content brand formed in 2016 in partnership between Turner and IMG. ELEAGUE has featured games from Counter-Strike: Global Offensive to Overwatch. The ELEAGUE Major Grand Final set a new record on Twitch with more than one million concurrent streams and a total reach of over 3.6 million viewers through the course of the event. It also received a Sports Emmy nomination for Outstanding Studio Design and Art Direction in March 2017.

In other competitive gaming news, Splatoon 2 just announced its next Splatfest: Sci-Fi vs. Fantasy. The new splatfest kicks off next Friday, November 17, at 9 p.m. PT / 12 p.m. ET. The last Splatfest, Vampires vs. Werewolves, was last October. Vampires won in a landslide victory, having not only the most popularity but the most wins in both solo and team matches. The matches before that were Flight vs. Invisibility, Mayo vs. Ketchup, and Cake vs. Ice Cream. The next Splatfest in Europe will be Warm Breakfast vs. Cold Breakfast. This follows up from the rather controversial Splatfest which asks if players hang up their toilet paper facing the front or back.
Japan’s next Splatfest happens tomorrow and asks players if they prefer fried foods with lemon or without lemon. The last Splatfest in Japan was Agility vs. Endurance and the one before that happened to be Splatoon 2’s first sponsored Splatfest, McDonald’s Fries vs. Chicken Nuggets. Nintendo promised that they will support Splatfest for at least two years after the launch of the game, giving us plenty of chances for Splatfests in the future. 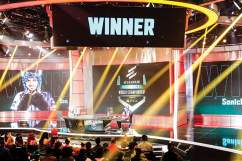