The team answered players’ concerns over missing features. Brannvall said that the customization system is coming even though they weren’t able to get it in time for launch. “I think we have probably the best looking Clone Troopers ever made and I know players really want to customize them (I know I do),” he said. “I can’t really commit to a date just yet, but we’re working on stuff and I believe it will change the game tremendously on all levels.” He also said that he would love to bring back the Galactic Conquest mode from the old games. As for the “new and improved Skirmish” mode that was promoted on the Battlefront II website, Keslin said that the Arcade mode was originally called Skirmish but named it Arcade because they felt it better describes the mode. Many of the elements of Skirmish including offline play, couch co-op, AI, and more formed the foundation of the mode.

Speaking of Arcade, User AsexualAmeba asked if they had any plans to change the credits cap of 500 for players like him who have busy jobs. Keslin said that they didn’t want players to exploit the mode in a way that could affect multiplayer mode. “We will be looking at data continually and make adjustments to make things as balanced as possible,” he said. “As for more Arcade, just like every mode in our game, we want to look for ways to expand it going forward. Unfortunately at this point we don’t have anything to share right now, but know that we care about Offline modes.”

The loot box progression system was a big talking point during the AMA. Wasilczyk said that they’ve seen the speculation about how long it takes players to earn things in the game (with Cheesegrater74 saying that it would take two hours per day over six years to unlock everything), but he claims that their averages based on the Play First trial are much faster than what’s out there. However, that could change as more players come in. “Nothing should feel unattainable and if it does, we’ll do what it takes to make sure it’s both fun and achievable,” he said.

Wasilczyk promises that they’re going to continue to adjust the crate systems, content, and progression mechanics ensure a balanced and fun experience for players at all skill levels. They’re also working on expanding the number of ways that players can progress. “There’s not much in the game that we wouldn’t revisit to improve the game for as many players as possible,” he said.

Keslin added that they’ve already started to tweak the existing systems based on the data from the Play First Trail players as well as other feedback. He also said that the goal with the Star Card class level requirements was to make you grab a wide variety of cards before specializing which ones you want to upgrade. “That said, we’re hearing loud and clear that you’d prefer a system where playing a class or a character specificially will upgrade its level instead, so we’re looking to make that change as soon as possible,” he said.

User HyzerRay asked how players are able to keep on even footing with those that have more time to spend acquiring credits and those willing to throw down money on loot crates for power increases via Star Cards and Hero Unlocks. Brannvall said that the balance will be achieved mainly through matchmaking. “We take into account not only your gameplay skills, but also inventory and time played, when we match players together in multiplayer,” he said, “You should not ever be matchmade together with players who are much better than you are. Ultimately your effectiveness is going to come down to skill, not the Star Cards that you have.” He added that they look at data from millions of matches to continuously rebalance items, unlocks, and matchmaking. In addition, Star Cards have maximum values regardless of how they are unlocked.

The team also promised to have more direct communication with players. Keslin said that they’re focusing more and more on finding ways to communicate with players and the AMA is just the beginning. This may include things like a frequent video series as well as having more of a presence on Reddit and official forums.

“Jumping into this AMA is just one of the ways we want to start to repair the bridge to our players,” said Keslin. “Lots of people told us that we shouldn’t do this this as it wasn’t going to go like we hope it would. That said, we are committed to continuing this dialogue even if we need to face some harsh feedback. We welcome the discussions and criticisms, we’re not just here for the praise (although it is nice to hear!). And we’ll continue to be here, and on our forums, talking to our community as we strive to work with you to make a Star Wars game you enjoy.”

A Reddit AMA from the team is especially unprecedented because of the backlash Battlefront 2 received recently. Reddit user TheHotterPotato played the Galactic Assault mode during the EA Access period, did the math, and found out that it would take about 40 hours to get the 60,000 credits needed to unlock Luke Skywalker or Darth Vader. EA’s Community Team tried to respond to the backlash by saying that the intent was “to provide players with a sense of pride and accomplishment for unlocking different heroes.” The response gained -678,000 points at the time of writing, making it the most downvoted comment in Reddit history.

During the game’s beta, many players found that the game had what IGN calls “pay-to-win elements” as many of the passive abilities granted from Star Cards in the loot boxes gave significant bonuses to paying players such as healing after kills, lower cooldown times for abilities, and Boba Fett becoming invincible if firing rockets from midair.

In Heavy’s impressions article on Battlefront II’s beta, the reporter criticized the loot box system saying that if you really want a skin or a certain passive ability-granting card, you need to sift through tons of useless items. “It’s essentially gambling where you put in money hoping to get something substantial while you risk getting something useless,” said the reporter. “This sort of psychological pummeling is expected in a free-to-play game, which is why it’s so unwelcome in a premium-priced game.”

EA has responded by toning the system down a bit as Heavy reported such as taking certain weapons out of loot boxes and instead having them be unlockable by playing the weapon’s specific class, having to be at a certain level to equip and upgrade higher level Star Cards, and removing Epic Star Cards from Crates. However the progression system still seems to be tightly tied to the loot box system.

In response to the recent backlash, EA reduced the amount of credits needed to unlock top heroes by 75 percent. 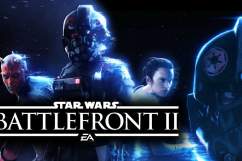