Update – November 15: Both entries for Fire Emblem Heroes and Fire Emblem Echoes: Shadow of Valentia have been fixed.

The nominees for The Game Awards 2017 have been announced. You can take a look at all of the nominees on the official Awards page.

Not only will you see a ton of games, but you’ll also see quite the mistake on one of the listings. And no, it’s not a nomination I didn’t want.

I guess there’s only one thing to say.

The Game Awards 2017 is scheduled to air live from the Microsoft Theater in Los Angeles on Thursday, December 7 in 4K HD format, according to an official blog post. The show will feature exclusive game world premieres, new game announcements, and musical performances. The live stream will be available on more than 16 gaming and digital streaming platforms, including localized versions for Chinese, South Korean, and Japanese audiences. Fans can vote on select categories using Facebook Messenger, Google Search, Twitter DM, and at TheGameAwards.com Highlights will also be featured in a Snapchat Live Story.

The game awards featured over 8.5 million viewers in 2016, according to the blog post.

This year’s The Game Awards will see the first ever Student Game Award, according to another blog post. Out of five emerging game development talent at the high school and university/college level, one will be awarded the SGA by a panel that includes Bethesda Game Studios Executive Producer and Game Director Todd Howard, Supercell CEO and Co-founder Illka Paananen, EA Motive Design Director Kim Swift, Respawn Entertainment CEO Vince Zampella, and Kojima Productions Director and Metal Gear Creator Hideo Kojima. The SGA will be awarded to a team or individual “based on the excellence and ambition of a game, without regard to the team size or subject matter.” 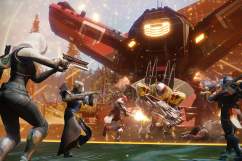