YouTuber and Comicbook.com Writer Liam Robertson investigated the reportedly troubled development of Animal Crossing Pocket Camp and how it used to be a town building game. Robertson has talked about the game’s development multiple times throughout the year but he released a video today compiling everything together.

Sources involved with the project told Robertson that development began in early 2016. Nintendo announced that they were making mobile games based on Animal Crossing and Fire Emblem in April 2016, as Polygon reported. Robertson said that both game were to be released in Autumn of that year. However, Nintendo then announced Super Mario Run at the Apple event in September 2016 with the game releasing that December. Robertson said that around that time Nintendo sent out a press release suggesting that the Animal Crossing game was pushed back and would release before the end of the fiscal year on March 30, 2017. Kotaku then confirmed in January 2016 that the game was delayed to make room for the Fire Emblem mobile game, now known as as Fire Emblem Heroes, releasing in February 2017.

Sources told Robertson that the Animal Crossing mobile game was originally a town building game with a working title of “Animal Crossing: Town Planner.” Players had their own space to place buildings and other objects, and had to manage the economy of their town. You could also visit other players’ towns and purchase items from them – a precursor to the ability to visit people’s campsites and buy resources from the Market Boxes in Animal Crossing Pocket Camp. Sources said that the game was more static and menu-based. It also didn’t have much of a gameplay loop and didn’t have the feature of being able to walk around as a player avatar like in other Animal Crossing games.

Robertson heard around the beginning of 2017 that the Animal Crossing mobile game was in trouble. A source told him that around November 2016 Nintendo decided the game needed to make some big changes because they though it was too bare bones and simplistic to get players invested for an extended period of time. The source said that not all of the previous work was scrapped but a fair amount of it was tossed away and rebuilt from scratch.

Robertson wasn’t the only one to hear from sources about the game’s development. The Wall Street Journal also heard from sources close to the project that development had to start over from scratch at least once and that it was also slowed down by the planning needed for its slate of limited-time events.

Back in October, Robertson uncovered some info from sources about the development of Marvel vs. Capcom: Infinite. The sources told him that the Monster Hunter fighter and Black Panther were planned to be included with the game at launch but were then cut and sold separately after launch as part of the 2017 Character Pass. Sources also told him that the game’s budget was equal to half the money reserved for Street Fighter V’s DLC plans, which may explain why some features from previous Marvel vs. Capcom games were cut and why the character models and animations received notable downgrades. 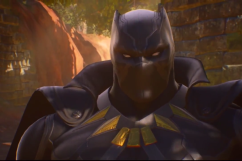