Arena of Valor is one of the hottest mobile games to release in some time and it’s easy to see why. This mobile title clearly draws inspiration from top MOBA titles like League of Legends or DOTA 2. Despite being a handheld version, Arena of Valor maintains complexity in its gameplay through character abilities and various items that can enhance your hero of choice. There are dozens upon dozens of items that users can equip their hero with during a match, but it can be troublesome to pull up an inventory menu to pick out what you want. Enter builds, a selection of six items that players can quickly tap on the corner of their screen to unlock without pulling up the menu.

However, Equipment Builds go beyond this and allow players to construct custom lists of items that they want to use in-game. To enter the Equipment Build screen go to the Main Menu and then tap on the Heroes tab. From here select your Hero of choice and the tap on the blue Equipment button in the bottom left corner. This will bring up the Armory and all of the different pieces of equipment you have have your character grab up. Keep in mind to unlock a lot of the best pieces of gear you’ll irst need to obtain all the prerequisite items in that skill tree. Tapping on the item will show you how many steps it will take to obtain that item.

Additionally, you can have up to three different builds that can be changed in the match itself. When you start a game the first build will be equipped by default so if you want something different then open up the inventory via the shopping cart logo in a match. To actually change your items in the armory select which of the three builds you want to alter. After this tap the Change button to produce red Xs over the items in your build. Hitting the X will remove that item from your current build and allow you to add another one below. Equipment is broken up into these five categories:

Each one serves a distinct purpose and we recommend making sure your build of choice fits the character’s playstyle. Thankfully, Arena of Valor also offers up “Suggested Builds” for those who don’t want top spend time figuring out what items they like. These are generally quite powerful builds and are a great tool for those looking to jump into Arena of Valor without any issues. Suggested Builds are also great starting points to tweak and perfect your item list. Remember, you are not bound to the these builds during a match as you can always open up the shop and purchase items directly – this is just for the sake of convince.

When starting a new hero always make sure to visit their page and learn what items they have equipped in their build. The last thing you want is to run into a fight blind with no idea of what gear you have on. 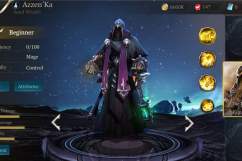 Arena of Valor: How to Unlock New Heroes