The newest Breath of the Wild DLC has officially released and it’s full of new content for players to explore and uncover. Not only does this second round of downloadable content include a new campaign, but there is also a ton of new armor that references characters throughout The Legend of Zelda’s history. One of these sets of clothing is the Phantom Ganon armor, which is one of the coolest looking outfits in the entire game. For the unfamiliar, Phantom Ganon appeared in The Legend of Zelda: Ocarina of Time as a boss in the Forest Temple. Now you can wear his awesome armor pieces when exploring the world of Hyrule, but first, you’ll need to do some treasure hunting.

Your first piece of armor can be found north of Lake Floria at the base of an incredibly tall waterfall. The clue here can be a bit tricky to interpret because this area has seven separate waterfalls, all of varying heights. The one you are looking for is just south or Corta Lake, at the base of the narrow waterfall. Spawn at the Faron Tower and fly to the marker indicated above. You’ll only have to deal with a single Octorok, so quickly slay him and use Magnesis to drag the chest out from under the water. If you’re having trouble finding it, the Green Marker in the photo above is the location right next to the EX Chest.

The second piece in this collection is perhaps the easiest to require and will require very little work to actually obtain. This chest piece can be found north of the Guchini Plain and west of the Faron Tower spawn point. Head to the small stone bridge just before the waterfall and climb down. There’s a small patch of dirt you can stand on by one end. Your chest can be found underneath the bridge in the water so use Magnesis to drag it out and claim your reward. There are no enemies guarding it, so this should be a walk in the park.

As for the final piece of the Phantom Ganon set, make your way to the Qukah Shrine that’s northeast of Lake Floria. The last EX Chest is located in the dirt by a large, stone bird statue that sits on a cliff. Just go to the purple marker we have displayed above and you should find this loot buried in the ground. Once again, equip the Magnesis rune and drag the EX Chest out from the ground so you can loot this item.

The Phantom Ganon set has a base defense of 12 when completely equipped, but the perks are far better. All pieces of this armor give a Stealth Up bonus, which can make you far harder to detect by roaming enemies. When every part is on Link he will receive both the Disguise and Bone Attack Up set bonuses. This drastically raises your stealth stat and bone damage is significant enough to matter if you’re in the early to mid-point of Breath of the Wild. We recommend picking this set up first since it offers way more benefits than say, the Ravio Hood.

For more Breath of the Wild tips, guides, and news make sure to visit Heavy’s gaming section. 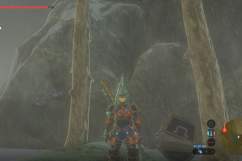 Breath of the Wild: How to Get Zant’s Helmet (Usurper King)