The newest DLC for Nintendo’s hit RPG The Legend of Zelda: Breath of the Wild has officially released. Dubbed, The Champions’ Ballad, this expansion not only builds upon the fantastic story campaign but introduces another collection of new armor pieces to acquire. One of these is Zant’s Helmet, which is taken from the Mad Usurper King who appeared as a primary antagonist in The Legend of Zelda: Twilight Princess.

If you want to add this helmet to your collection, first open up the Adventure Log and select the EX Treasure: Usurper King side quest. This will place a marker on your map in the Deya Village Ruins where a journal with clues for this items’ location is hidden. Just follow the waypoint and it will lead you directly to the book under some rubble.

A riddle will appear on a page of the journal that reads: “The helm of the self-proclaimed King of Shadows is in the swamp of the valley of dead trees, south of Dueling Peaks.” This location is actually right by you so open up your map and scroll over to Tobio’s Hollow. If you are having trouble finding this, locate the Dueling Peaks and mark the small body of water between two mountain regions.

Now either warp to the Toto Sah or Ree Dahee Shrine and head to this location. We recommend going around the mountains since they can be really difficult to climb, even with a fully upgraded stamina bar.

You’ll want to then head for that small body of water in Tobio’s Hollow, but we suggest getting higher ground. Zant’s helmet can be found in the swamp on the small island with two dead trees on it. The chest will be buried in the ground, so you’ll need to use the Magnesis rune to fish it out.  Be careful of the muddy water as Link can be instantly dragged underneath and killed. You can run through it for a few seconds, but it’s far easier if you just glide onto the island itself.

Zant’s Helmet makes Link completely unfreezable, which can be really useful against certain enemies. It also starts out with a base defense armor stat of 3 which is decent for a helmet. The quote on the helmet reads: “The ruthless Usurper King of the Twilight Realm wore a helmet much like this one… It’s a rather rare find.”

Sadly, this helmet is really only good for certain regions and won’t give you an edge like Majora’s Mask in Master Mode. Surprisingly, you cannot get Zant’s hidden blades or even his robes to complete the look. The armor piece itself does look nice with either the Ancient or Dark set. Now all you need is Phantom Ganon’s armor set to complete your transition from good to evil!

For more Breath of the Wild guides, news, and features make sure to visit Heavy’s gaming section. 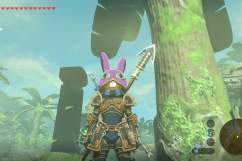 Breath of the Wild: How to Get Ravio’s Hood (Merchant Hood)