Update: Three huge announcements were made during this live stream. One of them is the fact that both Mega Man Legacy Collection’s will be coming to the Nintendo Switch. You can refer to the other big news in the tweet and reveal trailer posted below:

All 8 Mega Man X games are coming to Switch, PS4, Xbox One, and PC! Tune in at https://t.co/qn8POJ2KIj for more details! pic.twitter.com/dAHMD7w5rb

To proclaim that Capcom’s “Blue Bomber” has been to hell and back would be an understatement.

During his heyday, Mega Man starred in mainline games, excellent spinoffs across console and handheld platforms and stood tall as one of Capcom’s pillars. But nowadays, fans look to entirely different games to deliver them the old school thrills of Mega Man’s past. Sadly, everyone’s hopes and dreams in that style of play being reborn with Mighty No. 9 were sorely mistaken. But thankfully, Shovel Knight revived and retooled the best parts of the Mega Man formula. In years past, Capcom saw fit to release two Mega Man Legacy Collection’s that featured all of the main entries in the long-running series. It’s been a good while since we’ve heard some updates on the Blue Bomber. Thankfully, this special live stream will hopefully deliver us news of a new game or something else entirely.

Mega Man (known as Rockman in Japan) was first seen in his self-titled game on December 17, 1987. It’s about time to celebrate his 30th anniversary, correct? And judging by Mega Man Legacy Collection 2 producer Kazuhiro Tsuchiya’s past comments, we may be in for a special surprise:

I want to say that Capcom has not forgotten about Rockman. This here [Mega Man 30th Anniversary Logo] is being put to good use. Rockman’s 30th anniversary is coming in December – December, please remember that date!

Fans have been speculating that an entirely new Mega Man game is on the horizon due to the piece of concept art posted above. This mysterious piece of art (which was featured in Mega Man Legacy Collection 2 in conjunction with Mega Man 8) has never been seen before. Those who’ve played through Mega Man 8 know that this power isn’t even in the game or any other Mega Man release. Game Informer offered some speculation as to what this piece of art could be alluding to:

Some people noted that the new artwork was digitally drawn, which would be fairly modern for any Mega Man game on that collection. The design resembles the more modern design of Mega Man in Super Smash Bros. for Wii U and 3DS, with segmented feet and a lined glove. The art style also closely resembles that of Yuji Ishihara, character designer for the Mega Man Battle Network games, who definitely would not have any work in Mega Man 8 for the PlayStation 1.

A few theories are floating around about how this art ended up in Legacy Collection 2. Some people have suggested that an employee was looking through the art archives, saw the large hand on Mega Man, and assumed it was his Mega Man 8 rival Duo. Others think the seemingly misplaced art is actually an intentional tease for a new game. 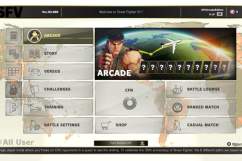