Update – December 21:Niantic officially confirmed the dates and effects for this year’s holiday event which offers a number of bonuses to players during different periods.

Original Story: A holiday event for 2017 in Pokemon Go has been confirmed by Niantic.

Archit Bhargava, Global Marketing Lead for Pokemon Go according to his LinkedIn page, told TechCruch that they’ll be hosting an in-game holiday event around December 21. He didn’t tell them what to expect for the event.

Last year’s holiday event gave players a chance to catch a Pikachu wearing a Santa Claus hat. The event also made Pokestops give players an incubator every day that they visit and increased the chance of getting an egg at Pokestops that hatched into the baby Pokemon. Later in the event, they increased the spawn rates of the Kanto starter Pokemon and their evolutions as well as double the duration of Lure Modules.

The holiday event lasted until January 8, 2017, so we expect this year’s event to end sometime around the end of the first week or January. We also expect this year’s holiday event to have a similar effect as last year’s since this year’s Halloween event had the same effect as last year’s but with more Pokemon receiving increased spawns (most notably the new generation three Pokemon) and the addition of special packages with useful items for sale in the in-game shop.

Speaking of gen three Pokemon, 50 new Pokemon from the generation are arriving to the game later this week with more rolling out over the next several weeks, according to Niantic.

Dynamic weather effects will also be added to the game, according to the developer. In addition to the in-game map changing to reflect if the outside world is sunny, rainy, snowy, foggy, partly cloudy, or windy, weather will affect Pokemon spawn rates and the effectiveness of Pokemon attacks.

The last event to come to the game was the Global Catch Challenge, in which players were tasked with catching over three billion Pokemon to unlock double Stardust, double XP, time extensions for Lure Module activation, and a 48 hour worldwide appearance of Farfetch’d, usually an East Asia exclusive Pokemon, while East Asia gets an appearance by Australia exclusive Kangaskhan. Players caught exactly 3,364,580,633 Pokemon during the seven day event according to Niantic, unlocking all of the perks. Niantic also added Legendary Pokemon Ho-Oh to the game after players reached the 3 billion Pokemon threshold.

The challenge began on November 19 and ended on November 26 but the rewards for double Stardust, double XP, and time extensions for Lure Module activation lasted until December 1. Players have until December 14 to catch Ho-Oh in Raid Battles. The availability of Ho-Oh was increased from its initial end date of December 12 allegedly due to a bug that prevented players from catching Raid Bosses if a member of the Raid Team dropped out mid-raid. The bug was fixed on December 3.

Pokémon GO Travel – A Japan Adventure7 days, 3.36 billion Pokémon caught by millions of Trainers worldwide. We followed 6 of them. #PokemonGOtravel Find out more about Pokémon GO Travel: http://www.pokemongolive.com/travel What a week! Over the past seven days, our Pokémon GO Travel hosts, iHasCupquake, Coisa De Nerd, and Rachel Quirico, took us on all kinds of adventures across Japan. We’ve…2017-11-30T14:14:41.000Z 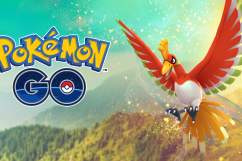