Street Fighter V’s producer (and Blanka’s biggest fan) made an appearance during the 2017 Capcom Cup Finals.

Yoshinori Ono ended up bringing a dosage of extra hype when he hit the stage. His first major announcement was all about the return of Sakura! Along with a brand new look, Sakura has taken on a new job now that she’s graduated high school.

Her part-time profession centers on keeping an arcade in tip-top shape, but she still hits the streets to dish out some KO’s. Her reveal trailer showcases her shoto style-focused moveset, such as her signature Shoryuken, Sakura Otoshi, Arcing Hurricane Kick, and a new air throw. Capcom Unity descried her V-Skill and V-Trigger’s in great detail, which you can read about in the excerpt posted below:

– V-Skill: Haru Kaze – Sakura leaps forward at the opponent, and once in the air has three different follow up options. Hitting punch will perform her signature Sakura Otoshi attack, which can be pressed up to three times to continue the combo. Pressing kick will trigger Oukakyaku, a forward flip that can act as a divekick. Finally, pressing throw (LP+LK) launches into a command throw called Kashinfu, which sees Sakura using her opponent as a spring board to jump back.

– V-Trigger 1: Haru Arashi – Activating V-Trigger 1 envelops Sakura’s fists in blue energy that powers up Hadoken and Tengyo Hadoken, giving them both an additional hit. Successfully hitting the opponent with one of the Hadoken will also put them into a juggle state allowing for additional attacks. She can also press HP+HK again to use Hogasho, a powerful palm thrust.

– V-Trigger 2: Sakura Senpu – V-Trigger 2 sees Sakura’s fists and feet enveloped by the blue energy, which powers up Shouoken and Shunpukyaku. Landing a hit will send your opponent flying into the air where you can cancel into V-Skill to follow up with either Sakura Otoshi or Oukakyaku. Both moves are improvements to their EX version and can be performed up to four times before V-Trigger 2 ends.

Once Sakura’s reveal came to a close, fans were treated to an all too familiar sight – mystery silhouettes that masked the identities of the next season’s remaining roster. Ono noticed their disappointment at that moment and gave everyone another huge reveal. Once that reveal trailer concluded, everyone pointed to Street Fighter V’s Season 3 leaks and noted just how factual they ended up being.

Street Fighter V: Arcade Edition’s cinematic opening (which can be seen below) showed off everyone who’s going to be a part of Season 3:

So now we know that Sakura, her furry buddy Blanka, Cody (in a brand spanking suit!) and Sagat are making their return to Street Fighter. Two new tournament entrants were also unveiled – a woman who’s outfit closely resembles that of a Shadaloo Doll (Falke) and a bearded fellow in a top hat (G). Fans can look forward to playing as Sakura in her standard, story, battle and nostalgia costumes on January 16. A new stage will also be available that day – Sakura’s own Kasugano Residence. Street Fighter V: Arcade Edition is looking more and more incredible as more news and reveals grace the world wide web. 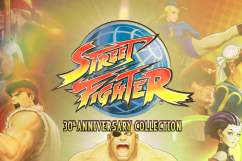