New details have surfaced for the Nintendo Switch port of Bayonetta 2.

The original Bayonetta 2 on Wii U had an extra multiplayer mode called Tag Climax mode, where you can team up with a player online to take on different combat challenges. The Switch version will add local multiplayer, according to Nintendo’s UK website. This is a very welcome option as Bayonetta 2 is best enjoyed with a friend nearby witnessing all the craziness with you. However, using local multiplayer requires both players to have a Switch and a copy of the game.

The game will launch with a special edition, according to Nintendo UK. The set includes the game, a download code for the Switch port of the original Bayonetta, a steelbook case, sticker sheets, and physical cards based on the in-game Verse Cards used in Tag Climax.

The game will also come with Amiibo support according to Nintendo UK. Using compatible Amiibo figures will instantly unlock the Nintendo-themed costumes for Bayonetta featured in the Wii U version as well as new weapons and more. Nintendo UK didn’t specify which Amiibo unlock what, including the one modeled after Bayonetta herself released when she was a DLC fighter in Super Smash Bros. for Wii U.

Touch controls will return from the Wii U version, allowing you to control Bayonetta’s attacks, movement, and dodges by using the Switch’s touch screen while in handheld mode according to Nintendo UK. Classic controls are also available if you prefer buttons.

Bayonetta 3 was revealed during The Game Awards 2017 and is coming exclusively to the Switch. No official release date has been announced.

However, Nintendo’s Norway website appeared to state that Bayonetta 3 along with Metroid Prime 4 and Kirby Star Allies are coming in 2018.

“The year 2017 has definitely been Nintendo’s year and we are looking forward to 2018, which will include new games like Bayonetta 3, Metroid Prime 4, or Kirby Star Allies as well as many other games that we will reveal during the year,” said Nintendo Norway.

This has not officially been confirmed yet, so it’s still all a rumor at this point. In fact, the page on Nintendo Norway no longer mentions anything about Bayonetta 3, Metroid Prime 4, or Kirby Star Allies. Also, according to comicbook.com, Nintendo doesn’t actually have an official Norwegian branch that publishes news releases. Nintendo Norway is actually a company known as Bergsala which works with Nintendo to import games and products into the region. 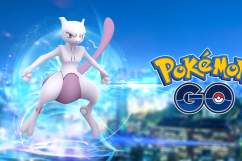