A new community event is just around the corner for Call of Duty: WW2 players and it’s introducing a plethora of new, free content. Dubbed the Resistance, this community event focuses on the French Resistance and their more scrappy style of fighting. The fan-favorite game mode Demolition will also return for those who want more objective based gameplay. Keep in mind, this event is completely free and it won’t require users to own the Season Pass. This community event releases just 6 days before the first DLC pack for Call of Duty: WW2.

If you want to jump into this event right away, the Resistance Community Event will officially begin on January 23 and is set to end on February 27. This will give users nearly a month to earn all the special loot and items that will be offered to players. Players will earn a free weekly supply drop that is tied to this event and there will be a double XP playlists for those who want to rank up quickly. There will also be new cosmetics and outfits for players to earn.

The biggest addition is the Resistance Division which will be available to users right from the start. These fighters specialize in close quarters combat, with a special focus on their knives and handguns. Just like the other Divisions, the Resistance will have access to four separate passive skills to boost their effectiveness in combat. It’s clear that Sledgehammer Games wants to introduce different styles of play and a pistol/knife focused character will certainly create some chaotic moments. Whether this design is viable outside of casual play has yet to be seen. Here is a breakdown of the four levels of the Resistance progression:

Along with this new Division, players will be able to earn new weapons that are tied to this event. These firearms are earned through new Orders that will ask players to complete fairly easy tasks like finishing 50 multiplayer matches. Once finished, a new weapon will unlock for you to use and bring death to your foes with. The main weapons featured is the Volksssturmgewehr rifle, Orso sub-machine gun, a new pistol, and a new knife. It’s unclear if these are the only new weapons added, but it’s nice that they are completely free to players.

Finally, the game mode Demolition makes its return to the Call of Duty franchise. For the unfamiliar, Demolition focuses on both teams trying to plant and defend bombsites. Think of it like Search and Destroy, except both teams are trying to defend and attack at the same time. This requires a lot more coordination and is certainly one of the most challenging objective-based game modes. Each player also spawns with a bomb, so there’s a lot of strategies involved in when and where to plant first.

The Resistance Community Event begins on Jan 23 and will run until Feb 27. For more Call of Duty: WW2 guides, news, and features make sure to visit Heavy’s gaming section. 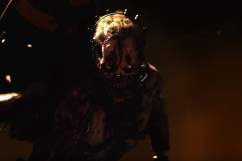