Arguably the biggest change to come to Fortnite since its release into free-to-play comes tomorrow (January 18) in the form of new locations on the west side of the map.

Both Fortnite: Save the World and Battle Royale are receiving an update but this post will be focusing on the Battle Royale side of things. One of the criticisms of the game so far has been the relative emptiness of the west side of the map. All of that is changing with this update.

The new map will add five new locations: Junk Junction, Haunted Hills, Snobby Shores, Shifty Shafts and Tilted Towers. With the release of the new update you can certainly expect players to be dropping into these locations with high frequency.

Biomes are also coming with this update which will help give each area its own unique feel. Taking a glance at the new map also shows you an idea of what this will be like. For a more in-depth write-up about the new locations, you can read our post here.

A new Battle Pass bonus will be available that gives players a free 5 tier head start in Season 3 when you buy the Season 2 Battle Pass. Players also have the option of buying 10 Battle Pass tiers for the price of six for a limited time.

If you haven’t noticed by now, friendly fire has been turned off and that’s something that is still being tested. For the time being, you don’t have to worry about being team killed in squads or blowing up your friends with RPGs or grenades.

A variety of performance issues are being ironed out with this update as well including:

For the full list of patch notes, head here. For more Fortnite: Battle Royale guides, features and news stay with us here at Heavy. 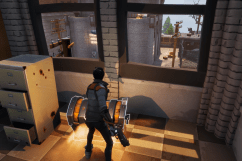