There are a lot of different weapons and items in Monster Hunter World, but one of the most unique is the Insect Glaive. This double ended spear allows users to not only pour on quick combo damage but send their hunter high into the air. Complementing this weapon is a secondary piece of equipment that lives on your hunter’s forearm called a Kinsect. When used, the Kinsect will both provide buffs for your hunter and deal elemental damage to a target.

Perhaps one of the trickiest weapons to use in Monster Hunter World, it will take a lot of practice and skill to truly master this hunting tool. Here are a few helpful things to keep in mind for people deciding to give this weapon a try and use it on a hunt.

Always Use Your Kinsect

This may seem like an obvious tip, but Monster Hunter World doesn’t do a great job of explaining what the Kinsect actually effects. When unleashed, the Kinsect will target a body part and extract “Essence” from a being that will change this bug’s color. What buff you are given will be based on the color essence it extracts from the monster.

You can manually fire out and call back your Kinsect at will during the battle. Remember, the Kinsect needs to hit different body parts to harvest different types of Essence so try to not hit the same place twice in a row. The two main colors you want to harvest are red and orange as this will make you very hard to deal with in the air. Strong air combos are incredibly potent and can deal a lot of damage to a large monster. Always try to have the strong attack buff on your character at all times, as this will increase your damage output and effectiveness when executing combos.

Additionally, when you manually fire your Kinsect out it will leave small clouds of beetles in the air. To trigger the elemental effect you will need to damage these clouds. However, any amount of damage will do so you can simply stay back and fire rocks via your Slinger at them. This puts you out of danger and lets you detonate some of the more awkward insect clouds that form.

The Insect Glaive gives players the ability to vault up into the air at any time. This offers Insect Glaive users superior mobility that allows users to strike enemies out of the sky with ease. Also, your Jumping Advancing Slash and Strong Jumping Advancing Slash will reset and launch the hunter back into the air if the strike connects. A smart hunter can chain these strikes together and stay in the air until they’re hit or run out of stamina. You can easily target key points on a monster like their wings or head via this method so make sure to practice.

Timing is everything when you are striking enemies in the air, so don’t just mash the different attack buttons. Be patient and wait for an opening before launching an offensive barrage upon your foe. Strong aerial attacks are extremely potent against enemies with wings since the hunter spins the spear in a circular fashion. You can easily cut multiple points on monsters like the Radobaan and completely break apart their armor. It’s vital that you can land multiple air strikes to ensure that your target takes a ton of damage. Plus, given your ability to vault, mounting a creature is actually pretty simple. 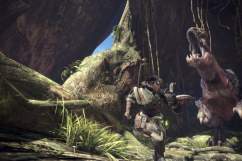 Monster Hunter World: How to Craft and Upgrade Armor

If you do have a monster that’s heavily armored on its back then you’ll want to employ some hit and run tactics. Thankfully, the Insect Glaive is perfect for getting in and getting out before a monster can retaliate against you. One of my favorite combos for this is:

This combo is especially potent since it allows you to dodge backward and strike at the same time. Being able to disengage is always key with the Insect Glaive and if you can’t pull this off then a simple vault into the air and air dodge will let you soar away from your foe. To midair dodge just hit X (PS4) / A (Xbox One) while in the air. Remember, you can end virtually any ground combo with your back dodge, so practice implementing it when you’re performing strings.

Currently, I have 5 different Insect Glaives, each focused on a different element to ensure I have the right tool for the job. As you play through Monster Hunter World you’ll slowly begin to unlock more types of Insect Glaives that revolve around elements and status effects like Water, Poison, Fire, and Thunder. Many monsters have different affinities to different elements so it’s important to have multiple items in your arsenal. Since you strike rather quickly, it’s easy to pour elemental damage onto a foe, meaning you can really take advantage of a specific monster’s weakness.

For example, the Pukei-Pukei is quite susceptible to Thunder damage so I will always bring my Pulsar Rod with me when hunting it. Make sure to check your Monster Field Manual to learn what type of element a beast is weak to so you can exploit it. Additionally, try to have your Kinsect compliment your playstyle since you can infuse it with an element as well. I like to run Thunder since there aren’t a ton of beasts that are completely immune to its effects. 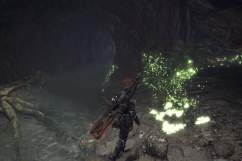 Monster Hunter World: How to Track and Level Up Monster Research