Monster Hunter: World, the newest installment in the long-running series and also the next main installment, has quickly become one of 2018’s most anticipated titles despite having a release in the first month of the year.

The new title represents a departure from recent titles as Monster Hunter: World will make it to the big screen in your living room instead of being trapped on the small screen of the Nintendo 3DS, like most of the Monster Hunter games that have been localized in the West lately.  What is even more surprising about this title is the fact it’s coming to both Xbox One and PC along with the PS4.

The console version, excluding the Nintendo Switch, releases January 26 but those waiting for the PC version will have to wait practically the whole year for their day in the sun.

#MHWorld is currently being optimized for PC and is planned for an Autumn 2018 release! pic.twitter.com/82JUC6iIMC

The team at Capcom is currently targeting an Autumn 2018 release for PC which may come as a big surprise to many who were holding out for a PC version but the precedent is there. We’ve recently seen PC versions of popular titles such as Destiny 2 and Injustice 2 take longer to receive PC ports but both cases have paid off in terms of performance.

It’s possible companies and developers want to avoid another PC port debacle like Batman: Arkham Knight which released for a little bit but was eventually taken down and put back up a little while later. Despite the extra time being taken with many PC ports, there have been some issues with recent games.

NieR: Automata’s PC port received some problems in the form of getting stuck on a white screen and the problem is still persisting despite being out for several months now.

There have been a pair of betas available on PS4 for Monster Hunter: World while no plans have been announced for similar betas on Xbox One or PC. Capcom does plan on supporting their new title with free DLC and PS4 owners will have access to Horizon: Zero Dawn content.

The game also features a living, breathing ecosystem and a day and night system. The landscape and environment play an important role in how player will tackle the various quests. Players will be able to strategically use the environment including terrain, vegetation and wildlife to their advantage in battle, or they can be inconvenienced by the elements. Players playing solo will be able to call for help from the worldwide group during quests when they run into trouble, which is a cool feature.

The release of Monster Hunter: World will mark the series debut on Xbox One, as well as releasing on PS4 and PC. One platform that was absent was the Nintendo Switch and that left many fans scratching their heads. Nintendo fans had reason to be optimistic after the Switch received the news of a port of Monster Hunter Double Cross coming to the console. It turns out that hype was short lived as Nintendo has been left out with this installment.

For more Monster Hunter: World news and guides, stay with us here at Heavy. 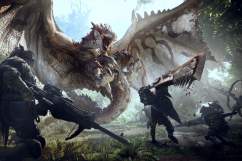