A new tweet from Blizzard has thrown the Overwatch community into detective mode as it quite possibly is hinting at new skins for heroes. While players largely assumed that the special Blizzard focused skins would make their way to the game next week, it appears that the developer has more up their sleeve. Released earlier this afternoon, the brief video pans across a wall that shows off the various new sprays that players will be able to use. However, some of them are skins that we have never heard of or seen before.

Mocked up in the “cute” design, this 15-second video shows off a variety of different skins that are both new and old. Some of the old ones we see are McCree’s Vigilante, Zenyatta’s Ifrit, Mercy’s Eidgenossin, Soldier: 76’s Strike Commander Morrison, and Moira’s Glam. We also get a peek at the Blizzard game skins like Roadhog’s Butcher, Orisa’s Immortal, Widowmaker’s Nova, and Zarya’s Barbarian. These, along with other Blizzard skins, were announced back during Blizzcon 2016.

Only 6 more days until our cosmetics update arrives in Overwatch! Join us as we count down to their release with new item reveals every day.

Yet, some characters on this wall have outfits that we’ve never seen before. The first up is Tracer who appears to be wearing an older bomber jacket. This could be a reference to her older RAF days or a possible pilot in the Starcraft series. It doesn’t match any of her current designs, so this is certainly a new skin.

The next new skin up appears to be Hanzo who is clearly mocked up to look like a Pandaren from the World of Warcraft expansion Mists of Pandaria. Given the heavy eastern influences these beings drew from in WoW, it should come as no surprise to see everyone’s favorite archer dress up like one. We also get a look at the Mei and Reinhardt outfits from their respective animated shorts that released last year. These were known about, but it’s still nice that they get their own spray.

Another curious newcomer is Pharah who looks exactly like a Pheonix airship from the Starcraft series. This ariel unit it a Protoss vehicle and the driver even has a quote stating that they are “The wings of justice.” Pharah seems to be the perfect fit and hopefully, her voice line will change to this when she uses her Barrage ultimate. Sombra’s could be a new skin but her outfit is a bit harder to distinguish, as it has a high chance of just being her Peppermint skin.

D.Va doesn’t appear to be any specific Blizzard character, though it’s possible I’m forgetting someone she could dress up as. The most likely choice is a Neko design due to the cat ears and schoolgirl outfit she’s sporting. There’s no doubt this has been a request for some time so it would be cool to see this design finally come to fruition.

Lucio’s is the most puzzling, but we are going to take a guess and assume it’s the concept art version of the character. When the Overwatch artbook released last year, fans noted that Lucio’s design was quite different. He sported a turntable along his hips and had a very pirate-inspired design. This has been another big fan request, one Blizzard even stated that they would “consider making it someday.”

The Overwatch Twitter is teasing that new items will be released every day up to the release of the Blizzard World map next week. Make sure to keep your eye out and check back with us as more details come forward. 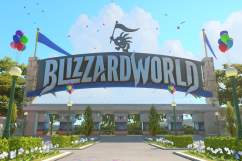 Overwatch: When Does Blizzard World Release?