Let's do it all again this week.

Overwatch League is off and running, and there are serious adjustments after one week. It’s not so much of a surprise at the top, where all three Korean-led teams jumped out to a 2-0 start. The trouble lies in Texas, where Dallas and Houston, two of our preseason top six, have started 0-2.

Dallas and Houston have dropped from the rankings, but one could hop right back in next week. The teams play each other this week, setting up an interesting narrative for Week Three: There’s a very good chance that one of these teams starts the season 0-4.

An 0-4 start wouldn’t outright eliminate one of these teams for the playoffs, but it puts them in jeopardy for missing at least the first stage playoffs. It’s a disappointing start for two teams with massive fanbases.

However, their losses open up room for other teams to crack the rankings. So without further ado…

Here’s our Six Stack for the second week:

Oh, we’re going there. Fusion might have the best DPS duo in the league, and Carpe and Shadowburn will be a headache for every opponent this year. It was instantly a problem for Houston, as the Fusion took Houston to a fifth map before destroying them for their first-ever win. Things didn’t go nearly as well in their second match, as they were boat-raced by London Spitfire. That second game also featured support sub Dayfly, who really struggled against London’s own stellar DPS duo. Philadelphia faces the Shock and the Gladiators this week, giving them a slight chance of rejoining this list next week.

The purple team from LA looked formidable in their debut, dismantling Shanghai Dragons. This changed in their next appearance against Seoul, but the Gladiators showed enough against the Dynasty to earn a spot on this list. Asher played Tracer well enough to dismantle the Dragons, but it was obvious that LA couldn’t compete with Seoul’s DPS characters. Shaz is quickly evolving into a fan-favorite, and Bischu, staying on D.Va, put up one of the highest fantasy scores of any tank last week. Gladiators have a tough week against Fusion and NYXL, and it wouldn’t surprise me if they dipped a bit next week.

My colleague Collin MacGregor surprised me when he said this was the third best team in the league ahead of opening night, and he showed why he’s smarter than me last week. Valiant swept their two games last week, and are the only team in Overwatch League with an unblemished map record. SoOn might be the best French player in the league, and his Tracer skills rank him as one of the top DPS performers. My biggest concern is this week’s schedule, where Valiant will face NYXL and London. They could end up back on the list even if they go 0-2, but it’s the way they lose those games that could determine how far they fall. If they go 2-0, however, they shoot right to the top of the rankings. 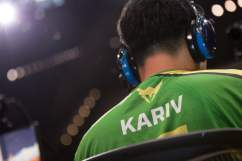 NYXL started 2-0, but it was bumpier than it’s fans would like. I guess Korean teams aren’t “supposed” to drop maps, but NYXL is unlike any other team in the league. Their best DPS doesn’t play until next season. Their second-best DPS only plays control points. Saebyeolbe is essentially the third DPS on the team, but is playing more Tracer than anyone on the roster. That can only hold for so long, and should get exposed against teams like London and Philadelphia. NYXL might not be the third-best team statistically after two matches, but there was never concern in their 3-1 wins over Boston and Houston. NYXL take on the Valiant on Thursday, which should be the best match of the week and tell us a little bit more about these rankings.

Is this fair? I’m not sure why I’m dropping Seoul here. I think it’s because I feel that if they played against London today, the Spitfire might have the edge. Dynasty are still playing around with their new DPS toys, and haven’t fully figured out the best way to integrate Munchkin and Wekeed into the lineup. Fleta is a totally different story, having established himself as the league’s best Widowmaker on the first day. It’s a boring week for the Dynasty, as they should breeze through both Florida and Boston this week.

Having a 12-man team, and being able to scrimmage internally, might just be a league-changing advantage for London. They might have dropped their first map in Overwatch League history, but won the next seven straight for a convincing 2-0 start. Spitfire destroyed the Fusion, winning teamfights by a 48-12 margin. My biggest concern is also with roster size, and these players fighting for playing time. Is there extra motivation to make individual plays? How strong is this team’s chemistry? And where is Rascal? London play the two of the biggest matches this week, taking on Dallas on Thursday and LAV on Saturday.