The first week of the Overwatch League has officially finished and it certainly delivered a plethora of exciting moments. There was a lot riding on this first week, but thankfully the first season pulled in over 400,000 concurrent viewers during the first day. With almost every team participating in the pre-season, many had a general idea of what to expect from the various rosters. This helped fuel speculation about which team would come out victorious and who would need to improve.

Going into the first week Seoul Dynasty and London Spitfire was viewed as the best teams in the entire league. Both teams ran some of the best players in the game, which allowed them to absolutely dominate their games. Dyntasy’s captain, ryujehong, showed off why he is the best Ana player in the entire world. We also got a fantastic showing from Philadelphia Fusion’s Boombox, San Francisco Shock’s Babybay, and Flordia Mayhem’s TvIQ.

Dallas Fuel stumbled this week despite being one of the big favorites, as they lost their matches against Seoul Dynasty and Los Angeles Valiant. However, one shouldn’t count them out as they were the only team to draw blood from Dynasty and really push them back. Valiant was the big surprise of the week, winning seven of their eight games and forced one draw.  Philadelphia also impressed in their match against Huston Outlaw. Given they were the only team we’ve never seen play, Fusion delivered a fantastic performance that shows a lot of promise.

Our match of the week is going to Dallas Fuel vs Seoul Dynasty. The match was extremely close and both teams delivered possibly the best game on Temple of Anubis to ever exist. Make sure to check this game out if you missed it!

Here are the results of every match for the first week:

However, the Overwatch League wasn’t free of controversy as multiple publications questioned the lack of women players on the teams. This kicked up a firestorm of outrage from fans and critics alike who saw the complete lack of female players as sexist. In an interview with Kotaku the Huston Outlaws general manager Matt Rodriguez stated: “You have to go through all these hurdles, like if you pick up a player, is the press gonna call it a PR stunt, or is it because she was the best?” There has been no official word from Blizzard regarding this controversy and there’s no indicator that this will slow down the Overwatch League’s popularity.

Moving into week two the matches we recommend you watch out for is the Los Angeles Valiant vs New York Excelsior, London Spitfire vs Dallas Fuel, and Los Angeles Gladiators vs Philadelphia Fusion. Seoul is up against Flordia and Boston, which may prove to be an easier set of games for the team. The pressure will be on Dallas this week as they had a few setbacks during the first week. Seeing if this team can rally together and strengthen their abilities on King of the Hill maps like Ilios will be vital to their success.

With one week down the excitement is just start, so make sure to tune in on January 7 at 7:00 p.m. EST for the start of week two. For more gaming news, guides, and features make sure to visit Heavy’s gaming section. 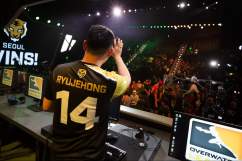