Reports on Reddit suggest that the USA-exclusive Tauros is more common in Pokemon Go.

According to User doonebug13 on The Silph Road subreddit, there are multiple reports of Tauros spawns increasing in rural areas. Many have responded back to the post with similar reports of increased spawns for Tauros, such as User docscoe who saw lots of them in Michigan and were fairly uncommon until now. User mlrollin91 said that they’d go 1-2 months without seeing any Tauros but got two of them in the same location at the same time.

User nintendude1229 shared a post on the Pokemon Go subreddit saying that the region exclusive Pokemon is popping up everywhere. User Tchaikmate responded to the post saying that they’ve seen notifications blowing up for Tauros and even caught a 100 percent IV Tauros.

User Pokemadness16 said that their neighborhood was flooded with Tauros when Pokemon Go first came out and would catch five to 10 a day. They could only catch two between the introduction of gen two Pokemon and now. Now they can catch several of them.

Have Tauros been appearing more frequently in your area? Let us know in the comment section below.

Tauros is not the only region exclusive Pokemon to receive a change in spawns this week. Heavy reported that Zangoose and Seviper have swapped regions. Seviper was previously available in Europe, Asia, and Australia while Zangoose was available in North America, South America, and Africa according to Eurogamer. Now reports show Seviper being caught in North America and Zangoose being caught in Asia and Australia.

The first large scale instance of the area region exclusive Pokemon could be found in changing was during the Global Catch Challenge in November 2017. After players managed to catch over three billion Pokemon collectively, Niantic released Asia-exclusive Farfetch’d globally for 48 hours while Kangaskhan became available in Asia.

Here are the locations of the other region exclusive Pokemon in the game according to Eurogamer:

Relicanth – Pacific Islands (According to Polygon) 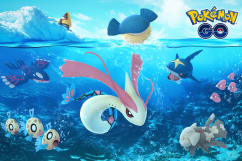