Ever since it was announced, Capcom has dropped a ton of details about everything new that’s coming with this needed update. All of the Season 3 characters have been revealed, everyone on the roster is getting a second V-Trigger, Arcade Mode will be a major focus, a Gallery Mode is getting added in, and two other modes (Extra Battle and Team Versus) are also a part of the AE package.

Speaking of Season 3, the first character being included as a part of that new package is Sakura. Capcom Unity is doing everyone a huge favor by showcasing the returning fan favorite during a new live stream. And thankfully, that live stream is happening today (January 9, 2018). Along with an extensive gameplay showcase of Sakura, this latest SFV: AE live stream will present more footage of the newest V-Trigger’s.

If you need a refresher on Sakura’s moveset, take a look at her moveset description in the excerpt posted below:

– V-Skill: Haru Kaze – Sakura leaps forward at the opponent, and once in the air has three different follow up options. Hitting punch will perform her signature Sakura Otoshi attack, which can be pressed up to three times to continue the combo. Pressing kick will trigger Oukakyaku, a forward flip that can act as a divekick. Finally, pressing throw (LP+LK) launches into a command throw called Kashinfu, which sees Sakura using her opponent as a spring board to jump back.

– V-Trigger 1: Haru Arashi – Activating V-Trigger 1 envelops Sakura’s fists in blue energy that powers up Hadoken and Tengyo Hadoken, giving them both an additional hit. Successfully hitting the opponent with one of the Hadoken will also put them into a juggle state allowing for additional attacks. She can also press HP+HK again to use Hogasho, a powerful palm thrust.

– V-Trigger 2: Sakura Senpu – V-Trigger 2 sees Sakura’s fists and feet enveloped by the blue energy, which powers up Shouoken and Shunpukyaku. Landing a hit will send your opponent flying into the air where you can cancel into V-Skill to follow up with either Sakura Otoshi or Oukakyaku. Both moves are improvements to their EX version and can be performed up to four times before V-Trigger 2 ends. 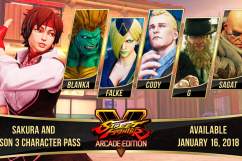 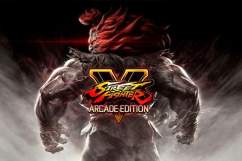