The Darkest Shore is the newest Nazi Zombies map released for Call of Duty: WW2 and it’s set on a fog-covered island. While the general idea of Nazi Zombies remains the same, users will need to contest with new horrors, quests, and traps that will certainly cause some trouble. However, after emerging from the corpse-filled trenches, we have come up with 10 tips and tricks to help you survive this hellish location. Keep in mind this won’t detail every major quest, item location, or tactic and will be written under the assumption that you have knowledge of how Nazi Zombies works.

Check out 5 essential Call of Duty WW2 The Darkest Shore tips below:

This is a very obvious tip, but with the original zombie map there, was some room for error. However, The Darkest Shore is set mainly in trenches and confined hallways, which makes kiting zombies very tricky. This means that most hordes of the undead will either need to be dealt with directly or you’ll have to create a loop to ensure you don’t reach a dead end. Memorizing the twisting routes and trenches is incredibly important, especially as the rounds begin to climb.

Remember, there are also various minecarts that you can unlock and ride for only 250 Jolts. These are a great way to quickly escape a horde or move to different locations. If you go down the minecart in the later rounds there is a high chance of explosive zombies being on the tracks. You’ll have to kill them before they touch you to ensure that you don’t go down while on the actual cart.

2. Use the Right Weapons

Having the right gun is always important in Nazi Zombies, but this is especially true in The Darkest Shore. The confined space allows specific weapons to absolutely shine, while others are quite useless despite being powerful. You want to avoid any semi-automatic or scoped rifles, simply due to the lack of long sightlines. Zombies will almost always be right in your face trying to kill you, so shotguns and submachine guns shine in the early to mid-game. When you start consider buying the Type 100, MP40, Combat Shotgun, or any LMG. These are wonderful for cutting down multiple opponents and can deal a good amount of burst damage when the undead come charging out of the fog.

Additionally, the Jack in the Box grenades is really, really good on this map. Throwing them in trenches will almost guarantee a massive multi-kill. Try to save these items for when someone gets downed or when you are trying to complete specific objectives like wait for the revived man’s door to open in the submarine bay.

One of the new features in The Darkest Shore is a weather effect that will roll in every few rounds. This fog will heavily limit your visibility and give the undead horde a significant advantage against you. When this happens you need to make sure not to wander off on your own, because it’s easy to get ambushed and killed. Instead, treat the fog as a mini break period and focus on simply surviving. Unless you are literally about to finish an objective, shift your attention to simply surviving the round and slaying the zombies rushing you.

Keep in mind the fog does not go inside, so you can make your way down to the submarine bay and defend there. This has enough room to kite the zombies and will let you see them coming from a distance. There’s also a chance that a super zombie with multiple arms will spawn and begin to chase you down. If you see this creature, don’t panic. Simply move your team into an area with more space and focus your attention on this beast.

It’s important to always have Blitz upgrades when playing Nazi Zombies, but some are simply better than others on this map. Armor should always be the first thing you purchase regardless, but consider buying the increased weapon damage first. KugelBlitz will cost you 2,000 Jolts and is located at the top of the stone path by the cliffs. Since your rather confined, increasing the weapon damage while using a shotgun can let you quickly cut through multiple zombies at once. This is also true for SMGs which usually have a lower base damage. Giving these a small damage boost will certainly make your life way easier in The Darkest Shore.

Another Blitz upgrade we recommended grabbing early is the one that discharges an electrical shock when you reload. You will almost always have zombies swarming you on this map, so being able to shock everyone around you is a great tool. The closed in environment lets you absolutely wreck hordes of ghouls that are chasing after you. This perk is especially useful for the submarine room where you have to reattach the soldier’s head. Since you’ll be locked in here for a fairly lengthy period, the multiple shocks from a team of four can quickly wipe out the zombies climbing over the railings.

The Ripsaw is a stupidly powerful special weapon. Firing saw blades at zombies it will instantly kill pretty much any enemy it hits. What makes this item great is that it will cut through multiple foes at once and clear entire groups. Even with a low ammo capacity, the Ripsaw is quite potent and should be the first major quest you focus on. To assemble this weapon you will need to go through multiple steps which includes:

You can find the saw blade on a dead body inside the power station by the Pack-a-Punch machine. The handle spawns in one of three random locations every game. It will always be in the bunker by the second power station by the bunk beds, record players, or tables. After this, head down to the workbench and then kill the zombies approaching you to charge it. Once fully charged you can buy this powerful weapon and cut your foes to pieces. Seriously, this weapon is really good and it’s worth the time/risk to craft. 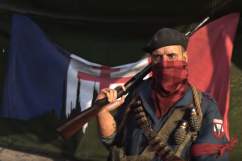 Call of Duty WW2 Resistance Event: Everything You Need to Know