Here’s an understatement – the Dynasty Warriors series has been around for a very long time.

Getting introduced as a fighting game back in 1997, developer Omega Force transformed the franchise into a beat ’em up starting with the second entry. Ever since then, fans have participated in the epic clashes between the Three Kingdoms through mainline sequels, expansions, and spin-offs. The originator of the Musou sub-genre is ready to make its return with an experience that’s deeper than past installments. Dynasty Warriors 9 is making huge improvements that’ll impact the franchise’s button-mashing battle mechanics and campaign progression.

To get a better handle on everything Dynasty Warriors 9 will offer on February 13, check out this extensive preview on what’s to come.

1. This is the First Entry in the Series That Introduces Open-World Exploring

In the past, players made their way through the campaigns of Dynasty Warriors games by simply selecting a mission, completing it, and moving on to the next cutscene. For the first time ever, players will be able to traverse an open-world representation of China on-foot, horseback, or boat. As you make your way across the map, different types of missions will become available – Critical Missions that progress the story and side quests that are labeled as Regular Missions. Regular Missions will entail invading and attempting to overtake enemy fortresses, taking down foreign tribes, or hunting wild animals. The game’s dynamic weather and day-night cycle impacts enemy behavior (such as making it harder for them to see at night or when it’s raining), which plays a huge part in how you choose to tackle certain tasks.

As you explore Dynasty Warriors 9’s version of China, you’ll discover different regions that’ll feature vast deserts, jungles, and snow plains. You’ll also come across historical landmarks, such as Mt. Song and the Yellow River, and run into various cities/checkpoints from the game’s time period. During the game’s moments of much-needed downtime, you’ll be able to decorate your own hideout, go fishing, interact with merchants, relax at teahouses, upgrade your gear with collected materials etc. Dynasty Warriors 9’s open-world exploration will give players more meaningful duties to undertake as they move through the campaign in a more involving manner.

Dynasty Warriors games are known to feature a huge variety of playable characters to take into battle. The ninth main entry will mark the return of 83 officers from past series installments. These fan favorite warriors (who’ll now be adorned in new costumes) will once again be spread out amongst the many states who fought during the Three Kingdoms period – Wei, Wu, Shu, Jin, and other family dynasties. As for which warriors will be making their series debut, those newcomers will be Cao Xiu, Man Chong, Xun You, Cheng Pu, Xu Sheng, Zhou Cang, Xiahou Ji (DLC), Xin Xianying, Dong Bai (DLC), Hua Xiong (DLC), and Yuan Shu (DLC). You can check out the entirety of the game’s roster at the following link.

While Dynasty Warriors 9 is once again all about vanquishing hundreds of foes on the battlefield, the battle system is getting a few much needed enhancements. The new system that’ll introduce those changes is known as the “State Combo System,” which focuses on the usage of Flow Attacks, React Attacks, Trigger Attacks, Special Techniques, and more. Flow Attacks act as your basic normal strikes, while React Attacks are more like maneuvers that happen based on situational timing and the space between you and your opponents. Trigger Attacks have the power to alter an enemy’s state based on what move you employ, such as stunning them, launching them into the air, or knocking them down. Along with all those abilities, your character can plow through enemies with counters, super moves, ranged bow & arrow attacks, unique weapon actions, and so much more.

Like every other action game on the current market, Dynasty Warriors 9 has already announced the DLC components of its Season Pass. What makes this entry’s Season Pass so special is how it’ll make previously unplayable characters…well, playable. The game’s future DLC packages will also come with new missions, items used for customization, and gear for battle. Check out the official description of the game’s upcoming add-on’s below:

5. Pre-Ordering Dynasty Warriors 9 at GameStop Gets You Access to Bonus Costume DLC and a SteelBook Case

Getting your pre-order of the game through GameStop means you’ll acquire a bunch of special outfits for certain characters. The DLC costumes you’ll get apply to the following warriors – Guan Yinping, Diaochan, Sun Shangxiang, Lu Lingqi, Wang Yi, and Wang Yuanji. The second pre-order bonus that’ll come your way from GameStop is a limited edition collectible SteelBook case. 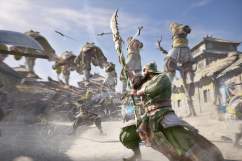