Far Cry 3 is getting remastered for current gen consoles.

The game is coming this summer to PS4, Xbox One, and PC. According to Ubisoft, the game will be available for free in the Far Cry 5 season pass. You can also play Far Cry 3 four weeks earlier than other players.

According to VG247, you can get the season pass separately or as part of the gold edition of Far Cry 5. Those purchasing the pass on PS4 and Xbox One will be handed the single-player portion of Far Cry 3 while PC players will get the full version.

The season pass for Far Cry 5 includes three different side stories all appearing to be based on popular films from the 1980s. Dead Living Zombies has you facing hordes of zombies in b-movie goodness, Hours of Darkness has you in the throngs of the Vietnam War, and Lost on Mars will have you facing alien arachnids on the red planet.

Remastering Far Cry 3 is actually quite ironic, considering one of the most notable quotes in the game defines insanity as “doing the same thing over and over again expecting things to change.”

Far Cry 3 was notable for its rip-roaring, weed-burning gameplay that had you traveling across a pacific island to save your friends and family from a crazed group of pirates. While the game’s story and its political implications have been a source of contention, the game is still fondly remembered for its exciting open world action and memorable moments. It helped codifiy the modern Ubisoft open world formula from its abundant amount of collectibles to its radio towers.

Along with the announcement of Far Cry 3 Classic Edition came a new story trailer for Far Cry 5, giving hints at the history of Joseph Seed and his cult The Project at Eden’s Gate. We also got a glimpse at some of the explosive combat of the game as players battle against the cult and their mission to “save” as many people as possible. Far Cry 5 is coming March 27 and let’s players explore Hope County, Montana from big rigs and airplanes with companions both human and animal.

Far Cry 3 isn’t the only Ubisoft game to have an upcoming remaster. Assassin’s Creed Rogue Remastered was announced last month and is coming on March 20 for Xbox One and PS4. It will include all of the downloadable content from the game including two bonus missions and DLC packs, according to a press release. It will support 4K on the PS4 Pro and Xbox One X and run at 1080p on the PS4 and Xbox One. It also features improved graphics and new DLC outfits based on past Assassin’s Creed heroes. 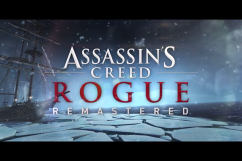