With Season 3 of Fortnite: Battle Royale rapidly approaching that means we have to first wrap up the second season.

The second season really ended up feeling like the first one since this is the first time we got a chance to experience the Battle Pass. This Battle Pass gave players access to a variety of dance emotes like Floss and The Worm along with some nice looking skins. By reaching the end of this current Battle Pass players unlocked the Black Knight skin which is the only way to get it and will presumably leave the game forever once the season ends.

Epic Games actually ended up extending the length of Season 2 so this gives players a little more time to finish up whatever tiers they were working on.

The new end time for Fortnite: Battle Royale Season 2 is now February 21. We don’t know if that means the season will run through the duration of that day or not, though.

Season 2 has been extended through February 21! Have you finished your Battle Pass yet?

At the time of this writing, players just have two more days to work towards the Black Knight skin. If you’re willing to dig into the wallet, you can decided to purchase additional tiers for 150 V-Bucks each which can end up getting expensive really fast. However, the skins won’t be around for much longer so we won’t judge you if that’s the route you decide to take. We’re also assuming that’s when the Wukong skin will be leaving the game as well.

Epic Games has given us a small look into the upcoming Battle Pass coming with Season 3. While we don’t have an exact start date for Season 3 we do know a little about the content that will be included. Epic Games and Fortnite have never been the best about dates, considering the Valentine’s Day event/update started a day after Valentine’s Day.

If the first skin and the artwork Epic Games has been using is any indication, it looks like Season 3 will ditch the medieval skins and instead take us into space with some new space themed skins. The first skin unlocked upon purchasing the Battle Pass is the astronaut skin so we’re likely looking at a theme there. We’re hoping for some alien skins with this upcoming season.

For more information about the Season 3 Battle Pass, head over to our post about it right here. 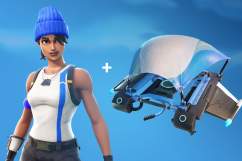