The latest Friday the 13th: The Game update will add a few more twists into the game.

Instead of being locked into a certain weapon with each Jason, such as a pickaxe with Part 2 and a Spear with Part 6, players will now have the option to mix and match the weapons to their liking. This will be unlocked once you reach a certain progression level and will be available to everyone free of charge.

This will allow players to bring weapon specific kills to other Jason models which will surely help break up some of the monotony of the game. We can confirm Savini’s pitchfork will not be able to be used by any other Jason but himself.

Also coming with the new update are custom keybindings for those who play on PC. According to Gun Media, this has been a request from PC players for quite some time so it’s cool to see it finally coming to the game.

Here is the official announcement of these two new features along with a short video showcasing different Jasons using different weapons.

Hello, slashers! Today we wanted to show you something that will be important to our fans who prefer to play as Jason. In the next update, and when you reach a sufficient progression level, you will be able to switch Jason’s weapon. Jason Part VII with a machete? Sure. Roy with a pig splitter? Go for it.

Everyone on the Friday the 13th: The Game team is excited to see the community start experimenting with different Jason & Weapon combinations!

With Jason being able to switch up his arsenal, we’re happy to let players know that custom key-binding is on the way for our PC players. We know that this is something that you have wanted for a while now, and our left-handed players have certainly been asking us about, and we’re happy to implement this highly requested feature.

The official Friday the 13th Twitter page teased the news today by saying it would drop a video if one of its tweets received 1,000 likes in the span of 30 minutes. The tweet ended up breaking that goal in less than two minutes and we received the video and information shortly after.

Well, that was something. Broke the goal in less than 2 minutes. We'll have it out in about 30 minutes. Good job! https://t.co/r1qQxvuQO2

After coming out of the gates strong, Friday the 13th: The Game has since lost a lot of its playerbase, on PC at least, but the team is slowly releasing updates and events in hopes of winning its players back. The game just wrapped up a double XP weekend and recently added a new map and a new Jason into the game.

The team announced it was bringing dedicated servers to both PS4 and Xbox One which meant the major updates would be pushed back until that is finished. Jason X has been teased in the Virtual Cabin so we expect that is on the way along with new maps and, eventually, the new Paranoia game mode.

For more Friday the 13th: The Game news, features and guides stay with us here at Heavy. 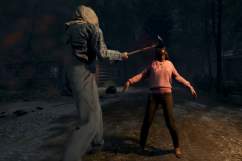