There has been a lot of chatter in recent days as to whether Houston Rockets superstar James Harden was wearing a hat that showcased Call of Duty: Black Ops 4. If you look at the hat closely it matches the same design and color of the Black Ops logo and while we don’t get the best look at it you can almost make out the Treyarch logo on the side of the hat.

Kotaku’s Jason Schreier has confirmed the logo is indeed for the upcoming Call of Duty title. All that was left to do was to officially announced the game and that was what was done today. Whether Treyarch and Activision wanted to announce the game this early is another story altogether but this is where we are.

The Beard has arrived, and he's ready for battle with the Thunder. pic.twitter.com/ky3E8TK9Hy

Aside from the brief teaser, all we know about the upcoming game is there is a global event on May 17 with a worldwide release set for October 12. Typically Call of Duty titles come out in November so this one is a month early.

Call of Duty: Black Ops 3 released in 2015 so there will have been about a three year period without a Black Ops title in the series. The Black Ops series has gone on to be quite the money maker for the series and fans have always held all of the games in the series in high standing. Black Ops 3 was the best selling game of 2015.

“Call of Duty: Black Ops III was the top selling title of 2015 globally by a wide-margin in both units and dollars sold-thru,” Activision senior vice president Rob Kostich said. “This also marks the seventh year in a row that Call of Duty has been the No. 1 selling franchise in North America, according to NPD. In fact, Call of Duty has surpassed 250 million units sold life-to-date worldwide. This achievement is thanks to the amazing experiences created by all of our development teams, and would not be possible without the incredible passion from the Call of Duty community. We congratulate Treyarch on creating an incredibly engaging and an enormously fun game with Black Ops III and look forward to what’s to come in 2016.”

We’ll certainly learn a lot more about the game during its global event such as if it will return to the boots on the ground style that saw Call of Duty: WWII be successful with. Whatever the case may be, there’s sure to be a lot of excitement surrounding this title as there is with pretty much all of the Call of Duty games. There has been no mention of boots on the ground so far so that might be a stretch to assume as of right now.

It certainly appears like the game will also be available on Battle.net but that has not actually been confirmed as of yet. Destiny 2 broke the mold for non-Blizzard games to appear on the platform as Activision games now pop up there.

On Call of Duty’s website players now have the option to link their Battle.net accounts along with their Steam, PlayStation and Xbox accounts. We’ve reached out to Activision on whether that has always been an option or if it is something new.

Activision calls the upcoming title a “game-changing experience” in the press release so it sounds like we’ll be seeing some new additions to the series. From the teaser it looks like the ever popular zombies mode will be making a triumphant return.

Call of Duty: WWII helped the franchise get back on the right foot after the polarizing Infinite Warfare. Building off the success of WWII, it appears Call of Duty upward yet again and Black Ops 4 may bring it to even new heights.

For more news, guides, and features make sure to visit Heavy’s gaming section. 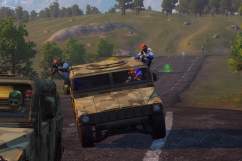