Square Enix has been going through and methodically releasing just about every mainline, and even some spin-offs, Final Fantasy title to PC and Final Fantasy XV is no different.

Coming off the releases of World of Final Fantasy and Final Fantasy XII to PC, Square Enix officially released Final Fantasy XV: Windows Edition yesterday and if you’ve been holding off on the PC port since its release then you’re in for a treat.

One thing you’ll notice right away is Final Fantasy XV is a beautiful game and that was no different than its release on PS4 and Xbox One. For a game in development as long as FFXV was it should come as no surprise.

If you thought the game was beautiful on consoles then you’ll be blown away by how much better it can get on PC. Thanks to the team at Nvidia, if you are on Team Green then you can take advantage of several more features.

Ansel gives players the ability to take beautiful screenshots and even rotate the camera 360 degrees to get the perfect shot. Think of it as having a better camera for Prompto, your resident party member who just loves to take pictures.

Nvidia GameWorks features are plentiful in this game and they do take the game to the next level graphics wise. Although these features make the game look more impressive, they do end up becoming rather taxing on your hardware so turn them on at your own risk. Even with a GTX 1080, I’ve been running into some issues with having everything maxed out with all of the GameWorks feature on.

Enough about the graphics, let’s get on to the performance. With the large variety of settings to turn on or off you’re sure to find some middle ground on what you deem playable or not. It is recommended that you have a GTX 1070 at 1080p with all the settings on High Detail if you’re looking for a 60 FPS target.

During my brief time with the game so far I can say for a fact that Final Fantasy XV feels right at home on PC. A lot of love and care was put into this port and it definitely shows. The Windows Edition comes bundled with all the DLC the game has received so it really makes it a worthy purchase if you haven’t experienced the game yet. 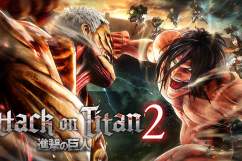 Attack on Titan 2: 5 Fast Facts You Need to Know